IDC released its Quarterly Server Tracker for Q3 2019 this week. You can check out their release here. The backdrop was particularly gloomy with 6.7% revenue and 3% volume declines year over year. We wanted to show some of the data and discuss our takeaways in the context of the site that is reviewing everyone’s servers.

We wanted to show two data excerpts before getting to our discussion. The first is IDC’s revenue figures showing a market decline of 6.7% on a year/ year basis.

Second, we wanted to show IDC’s figures for unit shipments which declined 3% year on year.

Inspur managed to continue its trend defying growth with 15.3% revenue growth and 11.1% unit growth year/ year. This quarter we reviewed Inspur NF5180M5 which is one of the company’s higher-volume products. I had the opportunity to ask Michael Dell about Inspur’s growth not just in the US but abroad at the Dell Technology Summit in Austin a few weeks ago just after the company’s DTOD Launch. His response was that they are not seeing Inspur competing in their primary markets. Assuming that is true, then Inspur seems to be growing in markets that Dell is not servicing. Inspur is gearing up for this growth as we found in my Inspur Intelligent Factory Tour where they are relying heavily on robotics to make CSP servers.

HPE remained a solid second place. Revenues slipped 3.2% and unit volumes shed 0.9%. Although HPE previously disavowed interest in lower dollar, higher volume servers, suggesting Dell chased that market for share figures, it seems that HPE’s mix also went to lower dollar servers this quarter. We reviewed the HPE ProLiant DL325 Gen10 this quarter which can be configured on the lower to mid-range of the company’s offerings.

Cisco was the other big gainer on the revenue side with a 3.1% revenue increase year/year although that amounted to only a $32M, increase. Cisco generally sells higher-dollar per unit servers like the Cisco UCS C4200 we reviewed which means it breaks the top 5 on revenue but not units shipped.

Lenovo picked up 0.4% of unit share but on diving revenues. The company lost 0.7% of revenue share indicating that their share mix was weighted toward lower-end servers despite wins such as the Harvard Cannon Powered by Lenovo Neptune.

Both Huawei and Supermicro lost volume tied in one of IDC’s statistical (within 1%) ties for 5th place in terms of volume. One of the interesting aspects here is that often Supermicro’s revenue is used as a pseudo proxy for Intel because of how closely Supermicro has aligned itself with Intel.

Perhaps the most interesting piece here is that the “ODM Direct” and “Rest of Market” segments are very large. Combined, they now account for around 47% of the revenue and 42% of the volume on the server tracker. We know there are large companies such as Quanta and Wiwynn among others with large volumes shipping to cloud customers.

Again, check out the full IDC summary linked above for their insights including regional variations. Personally, the next three quarters are not going to see impacts of new products. The market knows that PCIe Gen5/ CXL will be an important transition coming, but companies have a lot of new technology between the AMD EPYC 7002 Series Rome launch and the second half of 2020 Ice Lake Xeon launch to evaluate before making their moves. 2020 will be an exciting year for the industry. 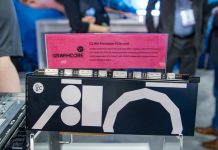