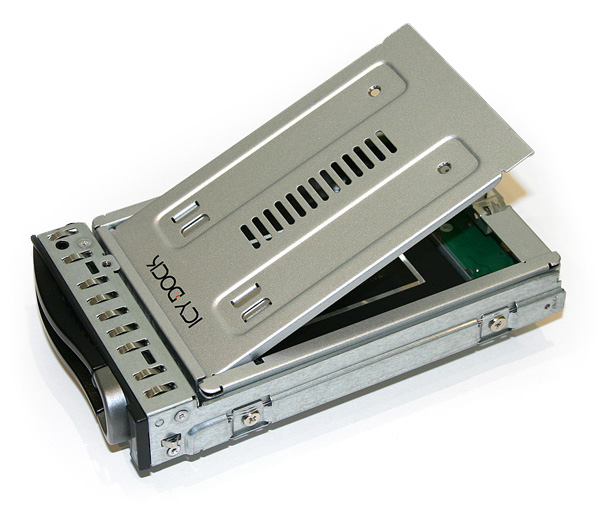 This has probably happened to all of us at one time or another: You are trying to add a 2.5″ hard drive or SSD to a server, but the only available space is a 3.5″ hot-swap disk bay. The solution, of course, is to use some sort of drive adapter, but you’ll need to be careful about what you buy. Tens of thousands of people before you have been overwhelmed by the number of possible solutions and then frustrated when they ended up buying the wrong one. I’m here to tell you which options actually work, and to steer you away from a few tempting options that do not.

If you are short on time, then here is the abbreviated version: For a universal solution, buy an IcyDock drive converter or a Western Digital IcePack, and consider a Supermicro adapter caddy if you have a Supermicro chassis and need a new caddy anyway. Now for the long version with more details, some of which are important:

Option One: The Icy Dock drive converter. Icy Dock offers four different models of drive converter, ranging from around $15 to $40. The two “standard” models are black plastic while the two “Pro” models are aluminum. All are “tool free”, which means that you can swap SSD drives in a few seconds without a screwdriver. Three are SATA-only, while the most expensive Pro model also supports SAS. If money is no object then buy the top model (MB982IP-1S-1) and be done with it. If you know that you’ll never use SAS, then the SATA-only Pro model (MB982IP-1S) will save you a few dollars. I haven’t used the better of the two plastic models (MB882SP-1S-1B) but it has a good reputation among enthusiasts. The plastic might help with vibration if you are adding a non-SSD drive.  I would avoid the cheapest model (MB882SP-1S-2B) because it is not designed to support the new 7mm drives, which are increasingly popular. These Icy Dock drive converters closely emulate the size and shape of a regular 3.5″ drive from an airflow perspective, and in a high density sever with precisely engineered cooling, this could be a big bonus. One nice additinal feature of the pro models: They have enough room inside to store a loose spare drive, for example a cold-swap  mirror of your boot drive or an alternate configuration for a lab computer. I use this feature quite often.

Option Two: The Western Digital IcePack. Originally built as a drive adapter for Western Digital Velociraptor hard drives being used in consumer workstations. This absolutely massive chunk of black painted aluminum does a fantastic job of cradling your drive while also providing lots of cooling – cooling that your SSD drive definitely does not need. These are definitely overbuilt, but they can also be quite cheap – around $15 on eBay. IcePacks closely emulate the size and shape of a regular 3.5″ drive from an airflow perspective, just like the Icy Dock converters. One important note: the screws used in the IcePack are far longer than standard drive screws. If you buy one, make sure that it comes with screws – and then be very careful not to lose them.

If you have a Norco or Supermicro chassis then you have other options that are worth considering.

The Norco disk caddy. If you have a Norco chassis, then you are in luck. Your 3.5″ drive trays with solid metal bottoms are pre-drilled with properly aligned mounting holes for 2.5″ drives, saving you around $15 per drive bay. Someone at Norco deserves an award for this simple but thoughtful design touch. Note this is not the B-D2T3 adapter which fits two 2.5″ disks in a 3.5″ mounting spot.

The Supermicro adapter caddy. If you have a Supermicro chassis, you have the option of forking over $8 to $20 for a special replacement drive caddy – the part number is MCP-220-00043-0N. It looks like a normal 3.5″ Supermicro disk caddy, but has built-in mount points for 2.5″ drives – mount points that are permanent and prevent the caddy from working with 3.5″ drives. These Supermicro-only caddies block almost no airflow, which shouldn’t be an issue unless you have a quad CPU or Twin model server. If the photo below looks odd, that’s because it’s upside down. These unusual caddies insert with the metal plate facing “up” in order to properly align the drive.

There are also a number of options that will not work – and unfortunately they are very popular and very cheap, often pushing the good solutions “below the fold” in a Google search:

The Dell drive adapter, part numbers 9W8C4 and Y004G. This is a simple stamped metal bracket that sells for around $10-$15. The concept is sound, and the design is pleasantly minimal, requiring no special screws. On the downside, these are flawed. First, as you can see in the photo, the right rear screw hole does not line up properly. Also, the drive ends up positioned just a few millimeters further rearward than it should be, which means that the connection to the backplane is right on the ragged edge of reliable.

Plastic adapter trays. Your local computer store, and every single e-Commerce vendor in the world, would love to sell you a $3 to $8 plastic insert tray that holds one or two 2.5″ drives in a 3.5″ bay. Do not be tempted. These work perfectly well in a standard computer case, but not at all in hot-swap bays. The issue is simple: These trays center the drives nicely in the 3.5″ bay, which is exactly the wrong alignment for a hot-swap backplane. All of the recommended adapters properly position the SATA port at the lower corner.

Metal trays from your SSD drive box. Your OCZ (or Corsair, or other brand) SSD “kit” may have included a nice looking drive adapter tray. Attach your SSD to this thin metal tray and it’ll look as though the SATA port is perfectly aligned for a hot-swap bay. It is not, and I really don’t recommend trying to force it. These trays, like the plastic ones, were designed for free-standing drive bays, not hot-swap drive caddies. They position the drive just a few millimeters too high and to the side. Patrick recently shared his experiences with these 2.5″ to 3.5″ adapters.