We recently looked at the QNAP QM2-2P10G1TA in a general-purpose mini-review. This was part of our preparation work for the HPE ProLiant MicroServer Gen10 Plus Ultimate Customization Guide. We also tested the QNAP QM2-2S-220A adapter. The QM2-2S-220A is a fairly straightforward PCIe 2.0 x4 to SATA M.2 SSD expansion card whereas the QM2-2P10G1TA has both storage and networking onboard. We still wanted to do a mini-review of this card in the context of a general-purpose system and outside of the QNAP NAS ecosystem that it is originally designed for.

Providing the PCIe to SATA conversion is an ASMedia ASM1062 PCIe Gen2 x2 to dual SATA III controller chip. This is a seasoned SATA controller so most OSes will support it out of the box. Still, you can use the ASM1062 to double-check whether this QNAP card will work in your system but with Windows and Linux it works out-of-the-box.

The QNAP QM2-2S-220A goes well beyond a simple SATA III chip. QNAP has thermal sensors for both of the M.2 SATA III 6.0Gbps ports. This helps to inform the fan speed so it can remain as silent as possible while still cooling the drives. There are also status LEDs on the back of the card.

Physically, our readers have probably noticed that this card may be a PCIe Gen2 x2 device, but it is in a PCIe x4 connector card. Dimensions of the unit are (L x W x H): 157 x 68.9 x 20.6 mm; 6.18 x 2.71 x 0.81 inch. The unit comes with the low-profile bracket pre-installed but it also comes with a full-height and QNAP specific mounting bracket that is used on some models.

The ASM1062 controller is a fairly well-known controller at this point. We simply wanted to test whether we could get full speed from the drives. Here is an example run of one of the drives we tested. 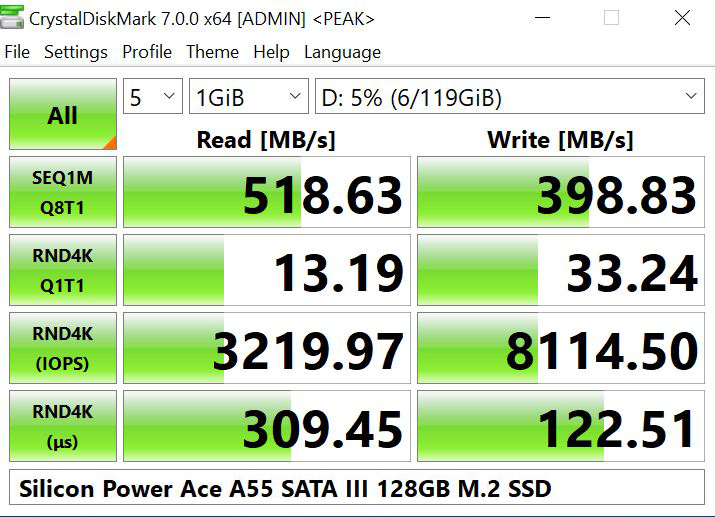 The Silicon Power Ace SATA III SATA M.2 SSD reached close to expected speeds. If one just needs SATA III storage capabilities, the QM2-2S-220A will make an excellent expansion device for these use cases. We see similar results scaling to two drives and we have also tried using mixed SSDs (e.g. two different drive brands and models) and this all works as expected. SATA III levels of performance are not an issue here.

Still, these numbers are now so far from what we see on the PCIe NVMe SSD side that we think is an important story. If you want higher-performance storage, get NVMe SSDs. If you are adding in a card to a PCIe slot anyway, skipping a SATA controller and just using NVMe makes sense. Although the performance was fine, we see this card being used for lower-performance boot or cache media rather than as a performance tier except at the extreme low-end.

In this market, the QNAP QM2-2S-220A is a harder device to recommend outside of the QNAP ecosystem. It is a nice card. Features such as the cooler, temperature monitoring and status LEDs are great. Still, using PCIe slots for SATA these days is much harder as the price premium for NVMe SSDs is so low that it is only for severely PCIe lane constrained systems where we would consider devices like this. Even then the question becomes whether the cooler and LED status lights are worth an 80% premium over units like the StarTech PEX2M2 which offers RAID and more M.2 SSD size offerings. The QNAP unit certainly looks higher quality than the StarTech but it is something to consider.

Overall, this is a case where it works, but we would caution our readers to ensure the card is right for the objective they want to accomplish.