In the lab, we just added a pair of Intel Xeon Platinum 8260L CPUs to the standard Platinum 8260 set we have. The L, in this case, means that the chips support up to 4.5TB of memory per socket. That gives the chips the ability to support 6x 512GB Intel Optane DCPMMs per socket as well as a full set of 128GB DDR4 DIMMs. Since we had both variants, we wanted to check to see if there was a meaningful performance delta between the two CPUs. Specs are otherwise the same, so we wanted to see if the addition of higher memory capacity support impacted performance, or if the L was simply unlocking higher memory capacities.

Previously we tested T series Intel Xeon Scalable CPUs to see if there is a performance impact. T SKUs are the extended temperature range parts. We found that there was little difference. With the L parts, we hypothesized that there would be no appreciable impact but we still wanted to validate that hypothesis.

For this exercise, we are just going to show a few quick benchmarks instead of our full suite. We are going to test a few different aspects to see if anything is substantially different. We are also going to use 6x DDR4-2933 3DS RDIMMs in each socket as using Optane DCPMM would change the memory speed and these results.

Here in our first test the Intel Xeon Platinum 8260 is slightly faster. By slightly, this is less than 1% which is within our test variation.

The Intel Xeon Platinum 8260L is about a second faster here, but again within a 1% test variation margin. 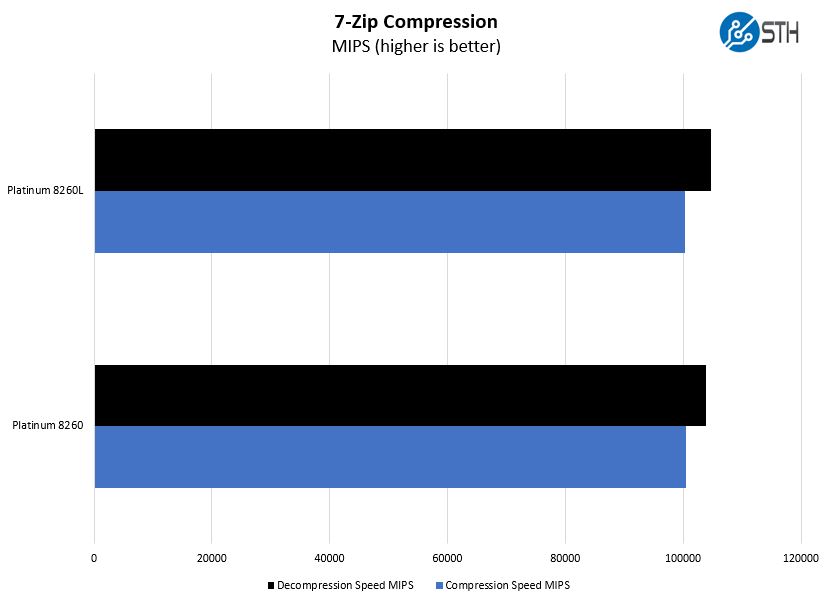 We have a small GROMACS molecule simulation we previewed in the first AMD EPYC 7601 Linux benchmarks piece. In Linux-Bench2 we are using a “small” test for single and dual-socket capable machines. Our medium test is more appropriate for higher-end dual and quad-socket machines. Our GROMACS test will use the AVX-512 and AVX2 extensions if available.

We wanted to test AVX-512 performance as this is one area we may have seen tuning that would not show up on the basic specs. Here, we can see another <1% delta between the two.

If you were tallying results, the Intel Xeon Platinum 8260L was faster on four of the six numbers we presented here. Still, no test found a delta between that chip and the Xeon Platinum 8260 of more than 1%. We actually have hundreds of additional data points, and across ten runs the averages removing the top and bottom quartile of results were all within test variations.

This is one of those cases where the test results supported our hypothesis. Looking at the spec sheet, you could have come to the same conclusion. Still, we wanted to go through the process of testing for ourselves to prove that these chips are interchangeable from a performance perspective. We often say this, such as when we did our Quad Intel Xeon Platinum 8276L Benchmarks and Review, but there is a difference between saying they should be the same and generating data that supports the hypothesis. Since we had both sets of chips, we figured that provided the opportunity.

Of course, using 6x 512GB Intel Optane DCPMMs in the system would have changed this view since the Platinum 8260L is required to support that configuration. Still, if you are not moving to higher memory densities, we think the Xeon Platinum 8260 is a better value than the Intel Xeon Platinum 8260L as the “L” carries a $7000 premium per chip.