Today we have the official Intel Apollo Lake launch. Based on Intel’s Goldmont Atom SoC platform, the Intel E3900 series is aimed squarely at IoT applications. Alongside the E3900 are the A3900 SKUs with environmental ratings targeted at automotive applications. Intel is currently waging a battle for the IoT space where ARM has many strong designs. For example, NVIDIA SoC’s have powered the displays in cars such as the Tesla Model S and Model X for years. Intel is fighting against that customer qualification for each new automotive OEM design win.

As one can see, these are low-power parts. With Apollo Lake and Goldmont Intel is able to push four cores as well as a GPU in a 12W TDP. The GPU is both a major space and power component on the SoC which makes its inclusion in that TDP envelope more interesting. Consider that in 2013 Intel released Rangeley which had four cores, no integrated GPU no PCIe 3 and four cores required a 15w TDP. That is a major shift from 22nm to 14nm. Given, there are a host of other differences but it does show some amazing progress at the low-end.

At STH we follow the low-end microserver market closely. The power required to run basic web servers is minimal. AWS EC2 t2.nano, t2.micro, and t2.small instances are usually outpaced by low-end Atom chips. We are seeing a few Goldmont based server designs in development that will service this ultra cost and power conscious market as well as low-end NAS units. We hope to have some benchmarks and a review coming in the next few weeks.

Intel is focusing on the GPU power as well as Intel Time Coordinated Computing Technology (TCCT) to push more compute to the edge for “fog computing.” 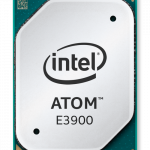 One area we think is becoming confusing is Intel’s naming scheme. These chips now have a prefix x5- or x7- which is likely meant to make them align with desktop parts. We wish Intel kept the older letter plus four digit naming convention on these parts as they are clearly meant for the IoT segment.

Intel Arc A770 with a Special Twist at Innovation 2022