Today we have an EVGA GeForce GTX 1660 Ti XC Black GPU review where we will run the card through our benchmarks. The NVIDIA GeForce GTX 1660 Ti is an entry level card that does away with fancy features such as RGB lighting and is not factory overclocked. It offers a full-length heat sink that covers the entire PCB and large single cooling fan that helps to lower fan noise. For our readers, this is a NVIDIA GTX 1660 Ti that is designed for cost-optimized compute rather than traditional gaming features.

Here we see the retail box for the EVGA GeForce GTX 1660 Ti XC Black which lists out product specifications clearly on the back.

Inside the retail box, we find only the EVGA GTX 1660 Ti XC Black wrapped in foam sheets for protection. No other items come with this kit which is nice; current drivers are available from NVIDIA and EVGA Precision X1 at EVGA’s website. We will look at EVGA Precision X1 software further on in our review.

The EVGA GTX 1660 Ti XC Black is a beefy graphics card with a large heatsink that covers the entire PCB. The massive cooling fan uses a taller fan hub designed for the thicker heatsink.

The back of the EVGA GeForce GTX 1660 Ti XC Black does not include a backplate which reduces costs, but also hurts structural rigidity as well as thermal performance.

Here we see the top of the EVGA GeForce GTX 1660 Ti XC Black which shows that this card is a 2.75 or triple slot design and the thickness of the heatsink. Off to the back of the card, we see an 8-Pin power connector.

Video outputs are minimal with only a Dual-Link DVI port, HDMI 2.0b, and DisplayPort 1.4 ports. For a compute-focused card, this is perfect if not overly ample.

It is excellent that EVGA offers two products for the GTX 1660 Ti line. The XC Black works well for small form factor motherboards and cases, while the XC Ultra fits larger cases. For our readers, the effective 3-slot design means that it will not fit in 1U chassis, but may fit in 2U chassis with horizontal orientation. Workstation and tower designs, like the Dell EMC PowerEdge T340 have plenty of room.

Next, we are going to do a quick specification check, and continue with our performance benchmarks. 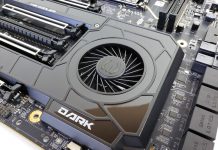