A month ago, STH reported on counterfeit NICs turning up on Amazon. We now have evidence from multiple reports from readers on the STH forums that such fakes have now extended to Intel Xeon CPUs as well. We will be showing you some of the tell-tale signs of that differentiate a fake from a genuine Intel processor in this article and hope to spread awareness so our readers do not run into problems themselves.

To start, some background on the Xeon E5 product line. From its initial launch in Q1 of 2012, to the final revision, released in Q2 of 2016, the mainstream Xeon E5 line spanned four generations and two different socket revisions. The first two generations (V1 and V2) utilized socket LGA2011, while the later ones (V3 and V4) used LGA2011-3 as Intel made the switch to DDR4 memory. There was also a lower-end version using the LGA 1356 socket, however, those did not have a large market share and therefore are relatively rare. There was also a socket LGA2011-2 for the Intel Xeon E7 line. Years ago STH had an article showing the 3 Different LGA 2011 pinouts.

We are now seeing a flood of Intel Xeon E5 V3 processors showing up on the secondary market as many companies are upgrading and sending their old hardware to recyclers. The previous Xeon E5 V1 and V2 generations have been readily available for some time now.

Certain models such as the Xeon E5-2670 V1 have been very popular for those wanting to build a server or workstation on a budget as they offered some of the best value for performance. 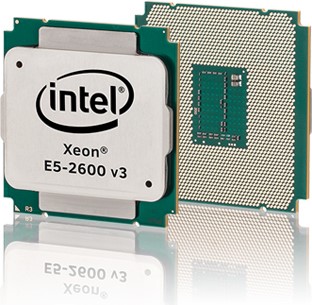 Intel changed the heat spreader design on the V3 and V4 revisions, making it one of the easiest ways to identify which generation a processor might be, even with no other markings present. It is also worth noting that on the higher core count models of the V2 and V3 generations, the PCB itself is wider, apart from the corners.

Intel made both socket 2011 and 2011-3 visually similar, but mechanically and electrically incompatible. The platforms are keyed differently and have different electrical pinouts. You can risk damaging both the processor and motherboard by incorrectly combining a CPU with the wrong motherboard generation.

There have been two reports of counterfeit processors received from Amazon’s marketplace so far from readers on the STH forums. The first report was a Xeon E5-2640 V4 that was purchased from Amazon Warehouse, which handles returned items sold by Amazon.

They arrived in retail boxes, in a condition that one might expect from an open-box product.

While the serial numbers did not match the box, the dead giveaway is the wrong heat spreader. It is apparent as shown in the montage above that these processors, while having the correct markings, are either from the V1 or V2 generation. An unsuspecting buyer might soon find their hardware damaged if they were to put this in a 2011-3 system.

The second report was a Xeon E5-2683 V4 purchased off woot.com, which is an Amazon subsidiary and is known for selling a limited number of products at discounted prices. Inventory is often fulfilled by Amazon itself, as was the case here.

The processors themselves were received in bulk packaging, inside anti-static bubble warp with generic labeling. While this is not unusual when buying components from a hardware recycler, they were advertised as brand new. Intel does not ship processors in such a manner and is quite particular about branding.

The ease of creating these kinds of counterfeits has been augmented by advancements in laser engraving. As a CPU only requires a very small working area, one would not require a large freestanding unit. DIY models, which are similar to hobbyist 3D printers in design, can be acquired for as little as $350 from AliExpress and larger assembled ones are still relatively accessible in the $2000 range.

The laser engraving is otherwise of reasonable quality. For someone who does not work with these processors regularly, they may not realize these CPUs have been re-marked until it is too late. It would be difficult to fool anyone that deals with this sort of hardware on a regular basis. To someone who rarely has hands-on with the parts, it would be very hard to tell, potentially risking damage to their server.

Counterfeits are becoming more prevalent and with the ease at which fakes like these are comingled in Amazon’s inventory, buyers need to be especially prudent about any purchases they make. Unlike the fake Intel NICs that STH reported on recently, these are high-value items and do not provide the functionality one might expect from a genuine product. In fact, they can do worse and cause irreparable mechanical damage to servers. Given that these were not isolated incidents, we might find that this sort of fraud only increases in prevalence and extends to more than CPU and NICs.

If you are in the market for an Intel Xeon processor, it’s in your best interest to order from an authorized retailer or reputable hardware recycler. Please post on the STH forums if you come across any fakes like this yourself so that others can be aware of what to look for.