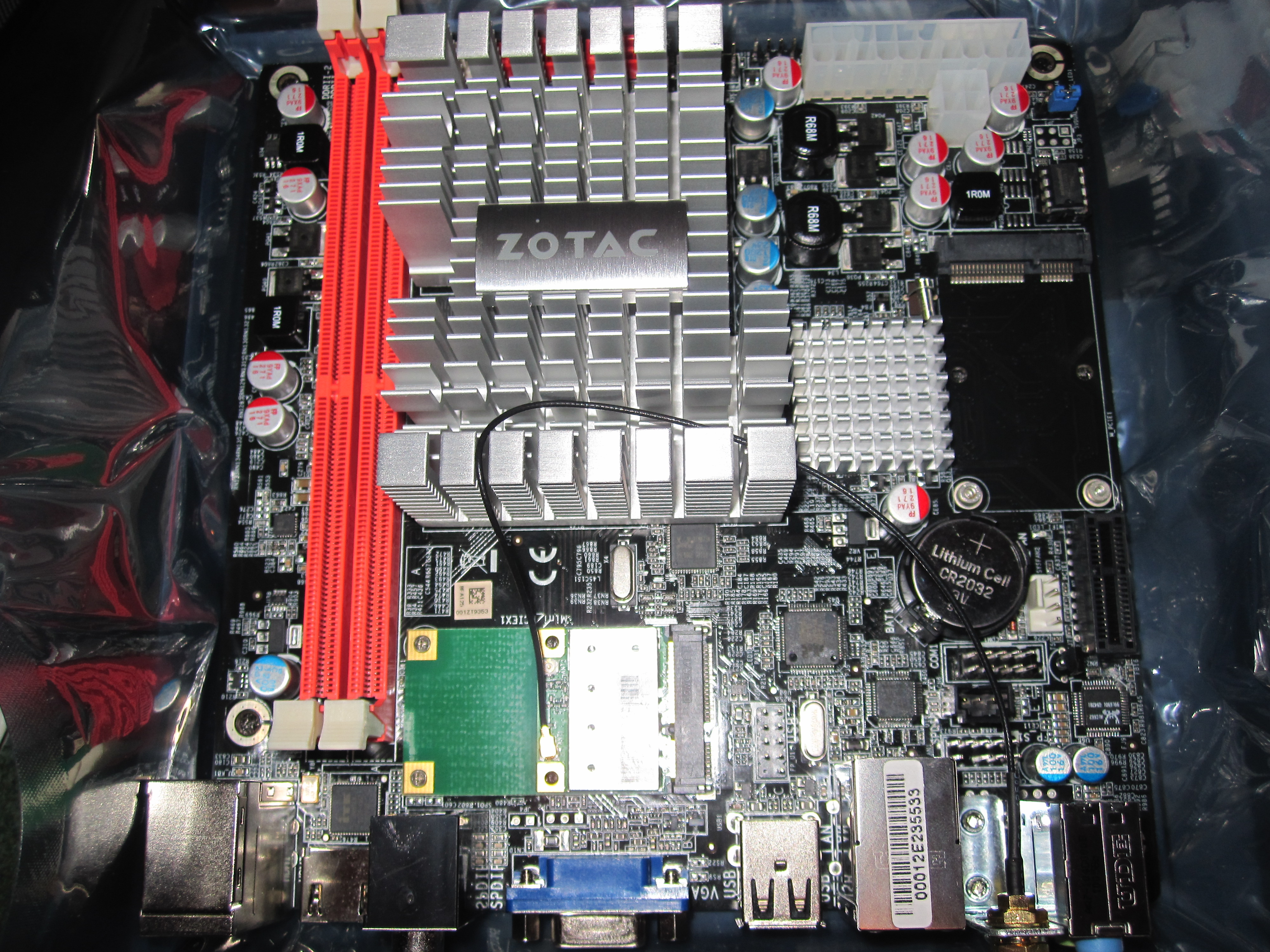 As one would gather from my previous Intel Atom D510 and NM10 post, I am not the biggest fan of the current D510 Atom platform with NM10 chipset. ZOTAC, to its credit, did take a rather mediocre platform and build a solid board around it. The most probable use case is a streaming media HTPC (non h.264) to a legacy 720p display. The nice thing about the ZOTAC offering is that it has quite a few expansion options for a D510/ NM10 based system, and it is ready to go out of the box. Unlike other Intel and AMD platforms, the Atom D510 and accompanying heatsink do not need to be installed by the user. One can literally plug in a display, mouse, keyboard, RAM, storage drive(s), and 20-pin power source and start using the system. As a preview, my end conclusion is that the ZOTAC board is a great choice given the platform, but the Intel platform leaves a lot to be desired.

I also am using the PicoPSU 150XT again instead of the integrated Apex MI-100 PSU for power consumption testing. I simply wanted to keep the test configurations as close as possible. In the real world, it makes little sense to use this configuration since spending $70+ on a small PSU and power brick disregarding the “free” PSU makes little sense economically, and from a space perspective. Switching PSUs yielded only a few watt difference (seemingly 1-3w) so one is not losing much using an included low capacity power supply. Also, using the PicoPSU 150XT required that I also use a 24-pin to 20-pin ATX adapter as the ZOTAC NM10-A-E is a small mini ITX board with no room for the extra 4 pins of a 24-pin connector to overhang the standard slot.

Dual mini PCIe slots plus a PCIe x1 slot mean that the ZOTAC NM10-A-E has great expandability for an Atom system. One can use the x1 slot to add an Intel Gigabit network card for solid wired connections. Furthermore, one of the mini PCIe slots is taken up by the wireless card. This AzureWave wireless card provides the built-in WiFi a/b/g/n wireless with a single antenna which had decent reception. It would have been nice for ZOTAC to have included a second antenna like it does on some of its higher-end motherboards for other CPUs.

The ZOTAC NM10-A-E also includes a Realtek 8111 based gigabit LAN. This is despite the fact that ZOTAC’s own NM10-A-E page lists the onboard LAN as 10/100. I was able to transfer a 1.6GB Microsoft Access database to the ZOTAC NM10-A-E based machine at 90.2MB/s which is a reasonable speed and well beyond what a 10/100 connection can achieve.

The included HDMI output is a major benefit of the ZOTAC NM10-A-E over Intel’s BOXD510MO which comes equipped solely with a VGA output. Then again, the D510/ NM10 combination is limited to 1366×768 output resolution (using HDMI out) which is well below par for 2010, despite the ability to output 2048 x 1536 video for VGA out. It should be noted that the GMA 3150 is new enough that it is not supported out of the box by Windows 7, meaning one needs to install drivers from the included optical media. Luckily, ZOTAC made them easy to find.

The ZOTAC NM10-A-E also supports 5.1 audio which output flawlessly via the optical out to my Onkyo receiver. One minor negative is the lack of HDMI audio. Then again, with other output possibilities, it is highly unlikely that the ZOTAC board would be unable to get audio to a destination component making this audio output setup acceptable.

Two DDR2 DIMM slots provide capacity for up to 4GB of RAM. This is another Atom platform limitation. Frankly, with 64-bit Windows operating systems, going over 4GB of RAM makes a lot of sense. On the other hand, Intel’s limiting the Atom  D510 and NM10 platform to things like low display output resolutions and two SATA ports makes it clear that the D510 is suitable as a office/ internet PC (low resolution), or Lunix/ FreeBSD testbed.

First off, the ZOTAC NM10-A-E is marketed as a fanless board. It turned out that even with a small PSU fan blowing over the ZOTAC heatsink, the board was unable to complete the Windows Experience Index test without rebooting. After a quick minute of troubleshooting, I installed a low CFM 120MM fan atop the ZOTAC heatsink and that lowered temperatures enough to complete the test. Frankly, if a motherboard and CPU combination is going to consume 13.5w and be marketed as a passively cooled system, it should not require extra cooling via a case fan to run in a stable manner. With that being said, the ZOTAC NM10-A-E consumed 25w in the testbed.

That is a fairly spectacular performance and is the lowest Kill-A-Watt reading I have seen in the past eighteen months. Of course, being an Atom CPU, I was unable to get the max power consumption over 32w which is unlike current, more traditional, desktop CPUs that have wider ranges between idle and loaded power consumption.

This is the board that I used for the Intel Atom D510 and NM10 versus the NVIDIA ION and Atom N330 post so the performance is going to be the same that was seen there.

Windows 7’s built in Windows Experience Index CPU benchmark is not the best CPU benchmark by any means. It is however installed in millions of PC’s (running Windows 7) and does provide a general performance ranking between CPUs that is accurate from a ballpark perspective.

Overall, the Windows Experience Index score shows that the CPU is slow, significantly slower than the Sempron 140 despite the Sempron being a single core CPU without hyper threading. Just two points of reference:

Clearly the Sempron 140 Sargas has a lot going for it, despite consuming slightly more power. Also of note, that Sempron motherboard + CPU (retail package) cost $40 versus the ZOTAC board’s cost of $120 (which included the CPU). Frankly, $80 easily buys a wireless USB dongle (or two), plus a lot of extra electricity.

Compared to the N330/ ION platform, the CPU and memory speeds increased slightly and the graphics scores were considerably lower. Personally, the Atom has never been an attractive gaming platform for me, even with NVIDIA ION. Where the ION does shine is its ability to playback HD content and display higher resolutions (my N330/ ION system has been powering a 24″ 1920×1200 Dell LCD for the past few months). Power consumption is better with the ZOTAC D510 based NM10-A-E but the graphics performance is not what it needs to be for a HTPC (unless ones goal is to watch DVD’s and non-HD Hulu/ Netflix content.

My other favorite benchmark is encoding x264 video using Handbrake 0.9.4 on CPU’s. This is because many people store video files on their Windows Home Server, and video encoding/ transcoding takes a lot of CPU power. It oftentimes makes sense to utilize the Windows Home Server to do this encoding for iPods, iPhones, iPads, Zune HDs and etc rather than a main PC due to the fact that video encoding uses 90%+ of available CPU cycles, slowing down the system it runs on. Here is the table, expanded for the new entrants:

This is a home/ small business server site. Ancillary to that may be client PCs/ HTPCs. Being fair to ZOTAC, they had to work with the Intel NM10 Atom platform, and they did a really good job. Of all the D510 Atom boards out there, this board had the feature set that made me want to give it a try. If one is dead set on the D510, the ZOTAC NM10-A-E comes with built-in WiFi and the ability to add quite a few other features. Currently I am using this box as a non-virtualized test platform, a task that the ZOTAC board performs well.