At STH, we review many servers from top vendors. We recently found a vendor that we needed to have better coverage on, and frankly goes under the radar for all but maybe a dozen or so companies. When we published our piece, The $5B Server Vendor You Probably Have Never Heard Of Wiwynn the feedback we received was great and pointed. As some perspective, this is a vendor large enough to be a top 5 worldwide server vendor. Wiwynn now has 550 employees. That is around $10 million in revenue per employee. Compare that to HPE which usually runs at under $0.5 million per employee.

We needed to do better covering such a large vendor. A few weeks ago, I was in Taipei for a day meeting with various companies and made it a point to stop at Wiwynn’s office. The company was gracious enough to give me a short tour of one of their labs. I wanted to do a short piece showing off their integration lab to show our readers where the cloud servers come from. We, of course, could not take pictures of everything in the lab, but we thought our readers would enjoy seeing what we could photograph.

Inside the Wiwynn Integration Lab

One of the places I was able to visit in my short time with the company is their integration lab. A key value proposition of Wiwynn is the qualification and validation they do on components for hyperscale customers. The lab sits in a large building, that also houses Wistron offices and away from the main Wiwynn reception.

Touring the lab, we were able to see well-known Open Compute Project designs. The aisle we were easily able to take pictures of featured Facebook designed OCP gear near us, and at the far end you can see a few Microsoft racks. Those were harder to photograph on our visit.

I was able to go inside the lab, which is several aisles deep. Wiwynn has an extensive testing and validation setup here where it is testing new servers, new drives, new cards, memory modules, cables, power supplies, battery backup units, and other components. This is one of the larger and cleaner labs that we have seen. Frankly, we were impressed with the scale of this lab given Wiwynn’s size and its customer base.

Within the lab, we saw many OCP Lightning chassis labeled with SSDs from different vendors. After being run through a battery of tests, the drives in these chassis are qualified for operation in their customer’s environments and any firmware tweaks that need to be made in the systems can be done here, instead of in the large data centers of companies like Microsoft and Facebook.

Switched PCIe storage shelves can be upgraded independently from their compute systems. Cloud providers can also use a single storage and compute design and create different mixes of storage to compute nodes. For example, one can have multiple nodes sharing disaggregated flash storage or one can have one node utilizing an entire shelf.

If you are wondering where flash storage is headed, these are the designs you should look at. Intel and Samsung are pushing ruler and NGSFF form factors, Wiwynn has its design for the cloud players.

These new designs are not just prototypes. As you can see, Wiwynn already has slick airflow guides to direct airflow around empty slots and protect connectors. 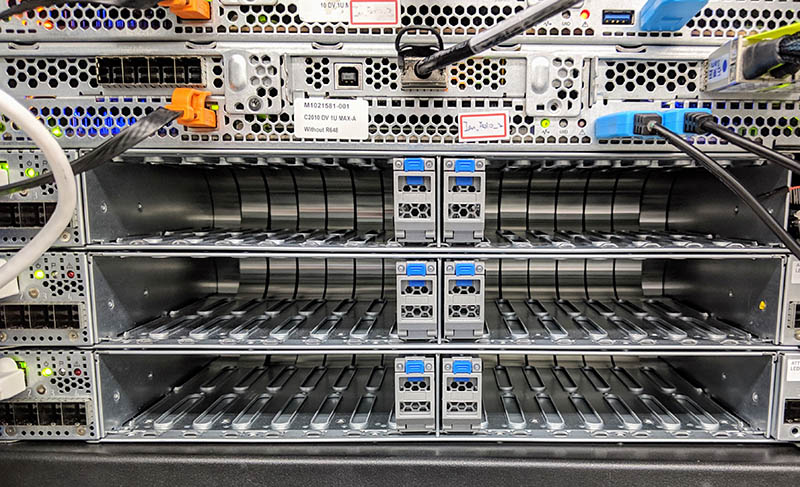 Wiwynn had a number of these chassis in their racks labeled with different drives. Those who won the SATA SSD wars will have a new battleground to fight over in the near future.

You can read more about the Facebook OCP Bryce Canyon here. In the lab, these were plentiful both for validating new drives and firmware, but also to use in conjunction with various compute and power options found in the lab. Wiwynn can build sets of hardware to validate configurations for its customers. If you were thinking of adopting OCP hardware and needed a vendor to hook together different combinations of compute, networking, and storage to validate node design, Wiwynn’s lab I toured would be a perfect place to do this.

One of the other highlights of visiting the Wiwynn integration lab was the altitude testing chamber. Wiwynn has a chamber capable of simulating different altitudes. The company can then test platforms and take measurements from around the system from 0 to 10,000 feet. We have seen these before and the fact that this could handle 10kW in the relatively compact chamber was impressive. Most servers are deployed from 0 to 10,000 feet so this makes a lot of sense. Wiwynn can test the performance of products simulating data center altitudes and ambient temperature ranges for its customers.

The company had a number of different stations in their lab, this was perhaps one of the most interesting.

One quick note, I have now been to a lot of integration labs in Taipei. Wiwynn kept an extremely tidy lab that was well organized. Some of the labs we go to at other companies are piles of wires, PCBs, and testing equipment. Wiwynn’s was very clean and organized to the point it was a stark contrast.

Many companies are able to co-design solutions with their customers. Large hyper-scale shops like Microsoft and Facebook have talented design teams and are giving back to the community through the Open Compute Project.

One of Wiwynn’s key differentiators is their ability to validate a number of different configurations for hyper-scale clients. Like many of our readers, I did not know exactly what to expect. Wiwynn, after all, is a rapidly growing company that has top 5 server vendor level sales, sells servers under its own brand, and has per employee revenue around 20x of traditional vendors like HPE. Seeing the company’s testing facilities helped underscore why the company is growing so fast. They have the facilities to do larger scale testing of OCP deployments in-house.

Since our goal is to remain #1 in servers, I have made it a mission to help our readers see some of the large server vendors that are building servers you use every day. Wiwynn is an example of a large server company that many of our readers may not be familiar with, but it putting out high quality and high volume servers for major clients like Facebook and Microsoft. Stay tuned for more in this space from STH.