One year ago that I left management consulting at PwC to focus full-time on the startup. Personally and professionally it was a major move for me as I joined PwC out of grad school and spent over eight years in the firm. For those that I have not had a chance to discuss progress with recently, I wanted to provide a quick update on how well the endeavor is going.

In the last year, we have built the absolute best third-party platform for independent data center hardware and software. We have capabilities ranging from editorial reviews, benchmarking services, vendor demos, and all the way to helping companies test different drives for their hardware appliances. Building the best platform has lead us to rapid expansion.

Numbers Behind the Growth 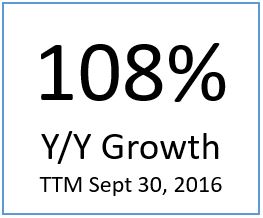 I started ServeTheHome as a personal blog in 2009. I was very excited when it received over 200 visitors a month by November that year. For the last few years, STH has served as a resource for millions of IT professionals a year as they research hardware and software purchases.

We are one of, if not the only, editorial review website that tests data center IT hardware in an actual data center. Even many larger websites still test equipment in makeshift testing labs that encompass homes, garages, basements and occasionally some converted office space. We are now testing hardware in a real data center which gives us hands-on experience operating equipment remotely. The data center we use can handle high-power racks. We have tested 8x GPU 3D rendering servers and machine learning servers just a few aisles down from where Baidu’s Silicon Valley machine learning lab racks are located.

The impact of this change over the last year has been evident. STH has grown by over 108% September 2015 to September 2016 which is an awesome figure. We also do very few press release copy pieces (e.g. “news”) and clickbait “Top 10 IT certification” articles. Instead, we focus on showing off trends in hardware.

Having the best platform has piqued the interest of many Silicon Valley infrastructure companies as our DemoEval lab has grown immensely over the past year.

We launched our demo and evaluation hosting service in October 2015 with three servers, and three switches in two racks. One vendor participated. It was, understandably, completely barren. Over the past year, we have added more vendors, hosting their private demos for those doing paid benchmarking and whitepaper services, editorial reviews (non-STH) and customer demos.

In June 2016 we opened a public facing service where we would host demo systems for vendors that IT professionals could try using a credit card. Previously, companies would get sent demo systems that would have low utilization and require racking, cabling, network integration as well as return logistics. Instead of shipping physical machines, we simply wipe and re-provision systems on a weekly basis.

As a result of this increased scope, a simple look at total numbers of nodes and switch ports shows significant growth over the past years.

We have a breakdown of what the DemoEval lab currently hosts in terms of a few easy-to-understand metrics including vendors, CPUs, storage and network ports.

Over the past twelve months, we have started with one client and grown to host hardware from over a dozen companies. We have also moved from hosting single machines to hosting entire hyper-converged clusters.

The trajectory of this is strong and we fully expect to have a larger list in the coming quarters.

Over the last year, we have seen an explosion in the number of systems we host. As a result, the raw CPU power in terms of cores and CPUs has been awesome to watch.

We are leading the way as the first lab to test products like Intel’s new Xeon D and Xeon E5 systems. We are also hosting GPU compute systems for machine learning, NVMe storage systems and etc. Here is a quick chart in terms of overall CPU core and RAM growth:

From a double-digit CPU core counts a year ago we now have over 1400 cores in the lab and around 9TB of RAM. RAM tends to be in limited supply for our lab.

In terms of storage, there is a major architectural trend from SATA and SAS SSDs to NVMe SSDs. With the price premium eroding (or inverting), NVMe SSDs are taking over our lab in terms of count.

The view in terms of capacity is even more dramatic as we are seeing NVMe SSD capacity leapfrog our legacy SAS and SATA SSD install base.

Our mix remains fairly consistent with Just over 300TB of flash and 300TB of traditional disk space.

We made a major miss in terms of our networking planning with our initial projection of 10Gbase-T being more popular than it ended up being. As a result, we have not been adding 10Gbase-T ports at the same rate that we have been adding SFP+ ports.

The major growth is 40GbE ports where we have added two new 40GbE switches in the past two months. Although we will likely add 25/50/100GbE in the next six months, the 40GbE ecosystem is extremely mature and pricing is excellent. We are phasing out 1GbE data networking save for micro-nodes and management interfaces. STH is moving to use 10GbE as a mandatory rating criterion in most categories as the ecosystem has hit an inflection point.

Growth is always fun. Seeing STH and DemoEval’s growth over the past year has been awesome. We now have capabilities far beyond what we had just one year ago. The road has taken a lot of investment, however, STH and DemoEval some awesome momentum behind them. One of the most rewarding experiences was the STH meetup earlier in 2016 and we plan to have more of these events starting in 2017.

One of the other areas that we have actively working on is small tweaks to the user experience. While many other content sites have transitioned to more ads, STH has actually decreased the number of ads per visit by around 10% over the past few months. We do rely on this advertising to keep the site running, but we are trying to ensure it stays reasonable and I am proud of the fact that we were able to take these steps.

Thanks for being part of the great STH community!

How We Test 2U 4-Node System Power Consumption