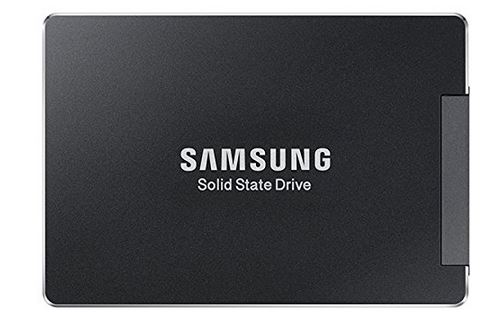 Today we have our quick benchmarks of the Samsung 845DC Pro 400GB SSD (model number MZ-7WD400EW.) We have been testing datacenter focused SSDs, both SAS and SATA over the past few months and this is going to be the first of at least five Samsung SATA configurations we are testing. The drive features a 400GB capacity using Samsung’s 3D V-NAND flash. This technology, which Samsung is first to the mass market with, enables higher endurance and performance than traditional 2D planar NAND. Samsung rates the drive at 7.3PB written/ 10 DWPD over five years which is in-line with competition such as the Intel DC S3700 400GB drive. Samsung also has a series of capacitors onboard the 845DC Pro which provide power loss protection (PLP), a feature not present in the consumer Samsung 850 Pro. From the spec sheet we know this is going to be a very competitive drive. Today we have some of our quick benchmarks to start getting a sense of the drive’s performance.

Here is Samsung’s primer on its 3D V-NAND technology.

One quick note here is that we are testing these drives on a LSI/ Avago SAS 3008 HBA. Most drives do experience performance differences on LSI SAS controllers versus Intel PCH SATA controllers. We have been using LSI controllers for years as they are extremely popular in the enterprise market.

For our quick tests during this part of the series we will just provide the quick benchmarks with only a bit of commentary. The results should be fairly straightforward and the index of previous articles in this series (linked above) is a good resource to compare against. We are adding a few comparison 400GB drives to the mix just to give some additional perspective in terms of performance.

Likely the two most important comparison points here are between the Intel S3700 400GB and the Samsung 845DC Pro 400GB lines. Most of the other SATA drives we have been testing recently are in the 800GB – 960GB capacity so those are not on this chart. The only AS SSD test where the Intel DC S3700 pulled ahead of the Samsung 845DC Pro was in sequential writes. Most results were close, but one can certainly tell that the Intel S3700 is aging compared to the newer 845DC Pro.

CrystalDiskMark showed high queue depth reads/ writes favoring the S3700 while the other workloads favored the 845DC Pro. The Samsung drive even outperformed all of the SAS drives in the 4K read/ write tests.

The value of the ATTO benchmark is really to show the best-case scenario. ATTO is known to write highly compressible data to drives, which inflates speeds of controllers that compress data like LSI/ SandForce does prior to writing on a given solid state drive. First we will look at read speeds.

The Toshiba PX02SMF040 400GB drive is taking advantage of its 12gbps SAS interface and is setting a very high bar. In the below 4K read space the SAS drives tend to do well, however the 845DC Pro still higher than the 400GB Intel S3700. On the larger size transfers we can see many of the 6gbps drives limited by interface speeds.

In our ATTO write tests we can see different tuning parameters set by every drive. Depending on the write size either the Seagate 1200 400GB or the SanDisk Optimus 400GB drives post the highest overall speeds. Three SAS drives, the SanDisk Optimus, Toshiba PX02SMF040 and sTec/ HGST s480 each occupy the bottom position at different transfer sizes. Both of our SATA drives the S3700 and the 845DC Pro occupy the middle ground throughout the tests.

Overall we are going to do a more in-depth comparison of some of the 400GB SATA and SAS offerings we have tested over the past few months in the near future. The Samsung 845DC Pro 400GB drive certainly delivers with its 3D V-NAND topping the Intel S3700 in many of our quick benchmarks. The street price of the Intel S3700 400GB is around $600 new but with so many OEM design wins they can easily be purchased on the secondary market for 1/2 or 1/3 of that. (See our Buyer’s Guide here.) The newer Samsung 845DC Pro 400GB currently costs around $470, however there are seldom any new system pulls making that pricing the best available. Overall, the Samsung 845DC Pro 400GB drive performed well in our tests making it a great option for a server SSD.