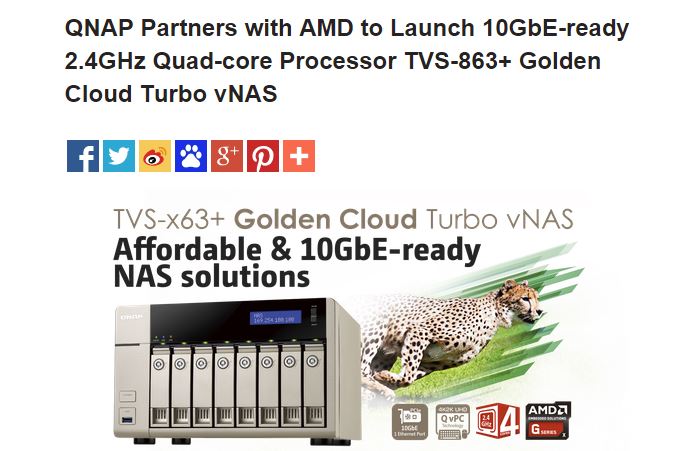 This week QNAP announced new TVS-x63 NAS units with AMD’s G-Series SoC onboard. The second part of the announcement was that select models would also incorporate 10Gb Ethernet. While many folks initially were excited that this could be a perfect platform for AMD’s new A1100 ARM SoC, that proved incorrect (this time around.) Instead the AMD G-Series SoC includes the company’s x86 based Jaguar cores. The quad core SoC provides not just traditional compute power, which is relatively not demanding on modern processors, but it also provides encryption acceleration and onboard GPU functionality.

In the NAS market, CPU accelerated encryption support is a must-have feature. NAS devices dominate home and SMB markets where they are oftentimes not locked in a secure cabinet and are subject to theft. Encryption support on NAS units allows companies to store data while providing an additional obstacle for those unlawfully appropriating devices.

GPU capabilities are primarily a SOHO feature. Onboard GPUs are utilized for transcoding duties. All major GPU makers have some sort of video transcoding acceleration. Since a primary home use application of NAS units is to store video and serve it on the network, having these transcoding abilities accelerated can assist in streaming media from the NAS. In units such as the QNAP TVS-863+, the onboard GPU can also be utilized to drive video output to an external monitor or TV.

One of the major trends we will see this year is a transition to more 10GbE networking. All major NAS vendors, including QNAP, now have 10GbE options. ARM vendors and Intel are all taking 10GbE controllers and embedding them in SoC designs this year. While the QNAP TVS-x63+ series still uses add-in cards to provide the 10Gb ports (e.g. QNAP TVS-863+) this will increasingly become an embedded feature in 2015.

See here for the initial announcement.