At CES 2020 Phison showed off QLC NAND support on a number of its controllers. Phison is not the best-known company, but it is the flash controller company that powers SSDs from many OEMs such as Toshiba and Seagate. The company was also an early innovator in the PCIe Gen4 space so most of the PCIe Gen4 NVMe SSDs to date are based on the company’s E16 controller. Adding QLC NAND means that the company was able to push capacities beyond what we see in the shipping TLC drives.

Phison had a private suite where they had a few interesting drives we wanted to show off. These include a 16TB SATA SSD using the new QLC NAND. QLC NAND is 4 bits per cell while TLC is 3 bits per cell. That adds density but puts an additional burden on controllers.

The company also had an 8TB NVMe PCIe Gen3 M.2 SSD. With modern motherboards such as the MSI Creator TRX40 Motherboard, we are seeing arrays of 7x M.2 SSDs available simply from the platform and its accessories.

Here are some of the performance numbers. You can see the QLC SATA SSDs including the 16TB QLC with the Phison S12 saturating the SATA bus.

The PCIe Gen4 x4 NVMe SSD with QLC is pushing just under 5GB/s of read speed. Gen4 is capable of much more, but this is a first-generation controller. With 4TB of capacity, that is a big drive.

These are many of the building blocks that we will see go into drives from a number of vendors.

Phison’s SSDs we have seen several times recently including in our Corsair Force MP600 Review and Sabrent Rocket NVMe 4.0 Review. QLC promises more capacity per drive which will drive up density. Write endurance will go down, but with better controllers and more raw capacity, NAND vendors are going to be bumping both performance and capacity up in the coming year. 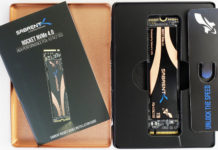 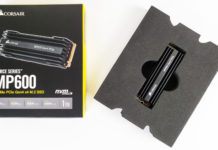