This week we got word of the iXsystems FreeNAS Mini E+ launch. This is a hot item since it brings a new Atom C3558 SoC to the FreeNAS pre-built appliance lineup. For those who want to get a pre-built system and not have to worry about collecting and assembling components, this is an easy way to get started with the open-source FreeNAS software. It also supports the company doing most of the NAS software’s development.

The iXsystems FreeNAS Mini E+ is similar to the Mini E with one major difference, the SoC. iXsystems moved up Intel’s from the Atom C3338 to the C3558 for this model. You can read STH’s Intel Atom C3338 review and Intel Atom C3558 review to learn more about those SoCs. One of the biggest changes to the stack is that the chips move from two lower-frequency cores to four cores with increased frequency. This design also doubles the L2 cache onboard (Atom C3000 chips do not have shared L3 cache to save power.)

From our Intel Atom C3000 Series Launch SKUs and Differentiation piece, we can see some of the differences of the Intel SoCs. The Atom C3558 is a 12 high-speed I/O (HSIO) lane SoC which means that in the Mini E+ there is a PCIe slot but those HSIO lanes will be used for storage connectivity. According to iXsystems, they are using the onboard Ethernet MACs for 4x 1GbE and not utilizing the 10GbE capabilities. Enabling 10Gbase-T requires a more expensive PHY that also utilizes more power. We saw in the FreeNAS Mini XL Plus Review 8-bays and 10GbE that iXsystems utilizes higher-end 10Gbase-T connectivity on its higher-end

One of the big changes from a platform level is that the Atom C3558 increases the memory channel count to two which means that one gets two DDR4 channels at two DIMMs per channel for four total. This memory also can realize increases in speed from DDR4-1866 to DDR4-2133 with the new SoCs. With the FreeNAS Mini E+, iXsystems is configuring 16GB of ECC memory as standard.

All we have to say about this is that it is about time! The 2nd Gen FreeNAS Mini line utilized the Intel Atom C2000 series SoC and the ASRock Rack C2750D4I motherboard we reviewed. These same SoCs are designed for long lifespans but also entered service in 2013 with a major bug that iXsystems responded well to and that Intel eventually fixed.

The world has moved on and Intel is starting to announce the next-generation Atom line-up in this space with the Intel Atom P5900. It is still going to be some time before we see new designs in this space so the Atom C3000 is the right option today. 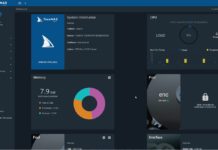