Today Intel made two announcements that hint at the company’s future. First, the company announced a billion-dollar (USD) fund to help early-stage startups and get their silicon built on Intel’s foundry services. Second, and related, Intel is joining RISC-V International.

Intel joins RISC-V International and Invests Another Billion in Foundry

Intel joining RISC-V International makes a lot of sense. While some may argue that it weakens the messaging around x86 everywhere, let us face it, that ship has already sailed. With Arm dominating device shipments, Intel needs to diversify. To be clear, Intel already makes products with not just x86 but also Arm cores regularly, but pushing RISC-V is a way to capture the next-generation ecosystem.

In parallel, and perhaps as an example, Esperanto and Intel also announced today a partnership with IFS to help bring Esperanto’s RISC-V accelerators to market. Esperanto gets a manufacturing partner and Intel gets a RISC-V foundry customer. If you want to learn more about Esperanto, check out our Esperanto ET-SoC-1 1092 RISC-V AI Accelerator Solution at Hot Chips 33 coverage. 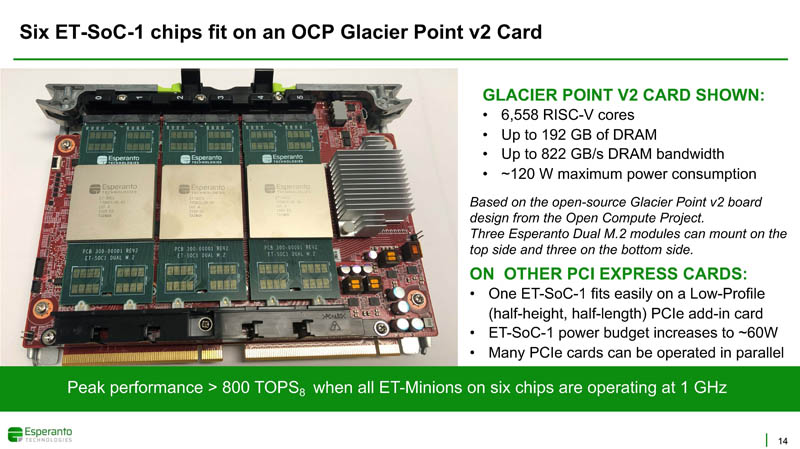 HC33 Esperanto ET SoC 1 Six Double Width M2 On Glacier Point V2Finding these early-stage companies building chips or accelerators, potentially accelerators that will find their way co-packaged into future cloud service provider chips, is a key strategy behind the $1 billion fund between Intel Foundry Services (IFS) and Intel Capital. Intel is pushing into the startup ecosystem to find new customers for IFS as it aims to build that business.

Intel’s current CEO, Pat Gelsinger, has been relentless lobbying for the US CHIPS Act subsidies for US chipmaking as well as EU and other government programs for regional manufacturing. That was a big theme in the Intel Ohio fab site announcement. There is a Field of Dreams “If you built it, he (they) will come” with regards to new fab capacity, but Intel’s longer-term play seems to have governments invest in the capacity, then hope that future government procurement contracts specify regionally produced chips, that Intel has the fab capacity to make.

Intel’s strategy makes a lot of sense. It also leans heavily on being able to leverage Intel’s balance sheet to make enormous investments to create foundry services, accelerate process improvements, and invest in a pipeline of new customers. Intel joining RISC-V does not make it likely that your desktop or server CPUs from Intel will be RISC-V in 2023, but it sends a clear message to the industry that Intel is betting on RISC-V to be successful and yield a pipeline that will help fill IFS capacity.