Our HPE ProLiant ML350 Gen10 test server, unlike our ProLiant ML110 Gen10 test server, uses standard HPE power supplies. In fact, the 800W units we are using in the ProLiant ML350 Gen10 are the same as we use in our lab’s ProLiant DL325 Gen10 servers. These higher-end hot-swappable power supplies are capable of reading power consumption and feeding that into infrastructure management tools. We hooked the HPE ProLiant ML350 up to our lab power meters and took a few power readings at 120V using our Extech 380803 True RMS power analyzers. We test tower servers on 120V power under the assumption that they will be deployed often in edge locations.

Many servers we look at are designed to optimize on one to four of these dimensions. The HPE ProLiant ML350 Gen10 is not designed to be great in one area and less well adapted to another. Indeed, the ProLiant ML350 Gen10 is so customizable that it is suitable for a wide range of deployment scenarios and configurations. That flexibility is what customers need when they look to tower servers deployed in environments like remote branch offices.

Readily apparent is the attention to detail labeling parts and providing instructions. These tower servers are often deployed to remote offices where there may be one to a handful of these towers in an equipment closet. Remote hands and field service personnel may have to service these machines years in the future. Small features like the clear airflow duct that has labeled memory slots on it so someone can easily locate the slot that needs attention may seem like small details, but they matter. Having field service go smoothly can help quickly restore productivity to an entire office. 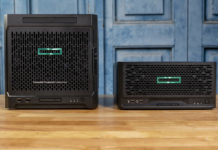