Windows Home Server v1 (WHS) was limited to using 2TB Master Boot Record (MBR) partitions in its storage pool, but the public preview of Windows Home Server V2 codename VAIL is not. This guide will show one how to use GPT Raid volumes passed through Windows Server 2008 R2 running Hyper-V into WHS V2 Codename VAIL. (That sounded way more complex than it actually is).

Microsoft designed WHS and Drive Extender to only work reliably with MBR partitions. As part of the WHS design, Drive Extender would provide data duplication redundancy instead of a RAID 5, RAID 6, RAID-Z, RAID-Z2 parity calculation scheme. The net effect is that large storage pools under WHS require 50% of the total storage to be utilized for redundancy purposes, which is a costly proposition when many disks are used. With raid 6 for example, one gets two disk failure redundancy and better performance than with Drive Extender when many drives are used. When using Raid 5 or Raid 6 with WHS, each large array would need to be broken up into 2TB MBR partitions. Furthermore, on Adaptec and some other raid controllers, only 4 MBR partitions could be created on a raid set, essentially making an 8TB array limit.

This week, Microsoft released the public preview beta of Windows Home Server v2 codename VAIL and changed the game for raid 5 and 6 users! GPT partitions CAN be used in WHS V2 Vail. Microsoft does not recommend using Raid with Vail so follow this guide at your own risk.

Since as of April, 2010 there are no drives larger than 2TB in capacity, one needs to create a Raid volume to test drive sizes larger than 2TB. For this test, I created one Raid 0 array with two Hitachi 2TB drives, one 7TB raid 5 array with Seagate 1.5TB 7200rpm drives, and one smaller Raid 6 array with portions of Western Digital Green 1.5TB drives (the other capacity is deployed elsewhere on the server).

First, one needs to create the Raid array. For this I used an Areca 1680LP raid controller with disks attached through HP SAS Expanders. I logged into the Areca web GUI and created my three raid sets and volumes:

Note, since these are larger than 2TB arrays, you need to make a selection between 4K and 64-bit LBA. I chose 64-bit LBA (because it works!).

After this is done, one needs to initialize the disk as a GPT disk in Windows Server 2008 R2, then set the disk to “offline” as is best practice when passing an entire disk or Raid volume to Hyper-V.

In the event you are wondering, yes, that is an Intel X25-V 40GB disk showing 37.27GB usable in the above picture. The 3.7TB array is the two Hitachi 2TB drives in Raid 0. Now that the disk is initialized, it can be added to the SCSI controller of the Windows Home Server v2 codename VAIL Hyper-V virtual machine, even if the virtual machine is already running.

Of course, if for some reason you are not running Windows Home Server v2 codename VAIL in Hyper-V or another virtualized environment, then you can skip many of the above steps and just pass the Raid array from the raid controller to the operating system directly. Since this guide is being done with the Windows Home Server v2 codename VAIL public preview beta and because it is a more complex procedure, I am only showing this for Hyper-V.

By selecting the drive in dashboard and then the “Add the hard drive to Server Storage” link on the Dashboard (as pictured above) one launches the add drive wizard.

This important screen reminds you that if you add the raid array to the storage pool you will lose all data. Since you will probably be using this with GPT disks with more than 2TB in capacity, heed the warning and make sure you are not about to experience massive data loss.

Above shows the Areca arrays all added. One can see the last 1TB drive is still being formatted and added to the pool. This disk shows “Synchronizing…” in the dashboard during this process.

That’s all there is to adding GPT disks larger than 2TB in Windows Home Server V2 VAIL in Hyper-V. This is a very simple process!

The support of GPT volumes is a great feature in Windows Home Server v2 codename VAIL that was sorely missed in Windows Home Server v1. Using large GPT volumes will help WHS V2 VAIL facilitate the impending disks with capacity over 2TB. Furthermore, it allows users to pass larger raid arrays to the server than its predecessor WHS V1. Thanks Microsoft for enabling greater than 2TB disk support in your new product! 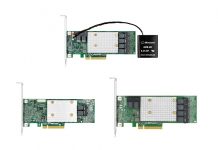