We are moving towards using larger test sizes on our benchmarks, but on several tests, we also used the smaller default test sizes. This allows us to see the difference between lighter and heavier workloads. Unfortunately, our entire backlog of SSD reviews did not include this testing methodology, so we are doing the best we can with generating comparison charts.

This is a popular speed test in the video community. It shows whether a storage device is suitable for throughput required at a given video format.

As a PCIe 3.0 NVMe SSD, the WD Blue SN550 1TB has a good showing here and handles every format this benchmark can test for. Some previously tested QLC-based PCIe 3.0 SSDs do not pass all these tests, and no SATA based drive can do so.

CrystalDiskMark is used as a basic starting point for benchmarks as it is something commonly run by end-users as a sanity check.

Using the 1GB test set, the WD Blue SN550 1TB is right on target and slightly exceeding the advertised 2400 MB/s read and 1950 MB/s write specs. With that said, this drive is obviously targeting middle-of-the-road performance overall. 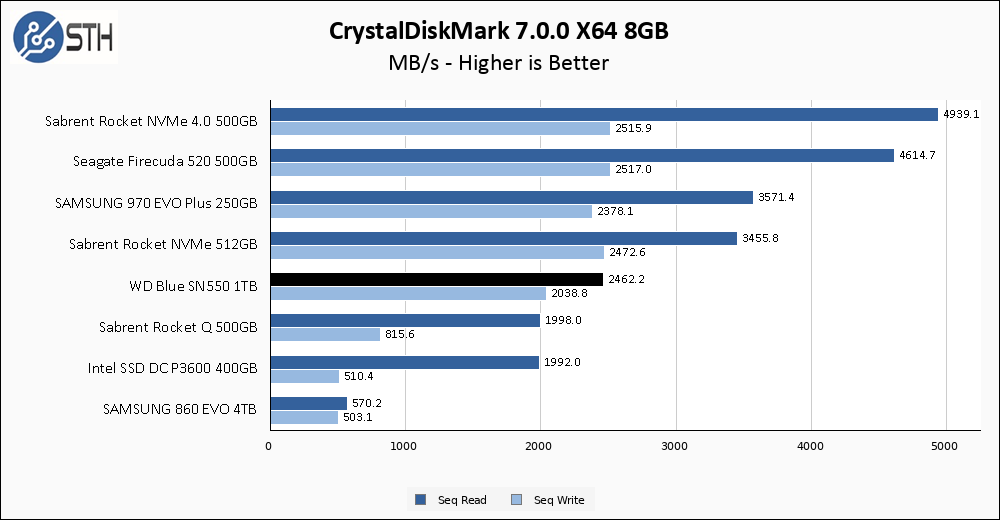 WD Blue SN550 1TB CrystalDiskMark 8GB ChartMoving to the 8TB test set has a negligible impact on the WD Blue SSD, which is encouraging.

The ATTO Disk Benchmark has been a staple of drive sequential performance testing for years. ATTO was tested at both 256MB and 8GB file sizes.

In the positive column for this drive is that, once again, the larger test set has no negative impact on performance; the ATTO 8GB test set is nearly indistinguishable from the 256MB one.

Anvil’s Storage Utilities is a comprehensive benchmark that gives us a very in-depth look at the performance of drives tested. This benchmark was run with both a 1GB and 8GB test size.

With Anvil running a 1GB test size, the read speeds are lower than with CDM or ATTO, while the write speeds remain higher. In terms of relative performance though, the WD Blue SN550 1TB has a better result here than in some of the previous benchmarks.

With 8GB test size, there is a very minor dip in the results relative to the 1GB results, but not much.

AS SSD Benchmark is another good benchmark for testing SSDs. We run all three tests for our series. Like other utilities, it was run with both the default 1GB as well as a larger 10GB test set.

With the smaller test set, read performance continues to be a bit below the rated specs while writes are consistently close to the 1950 MB/s target. Obviously the WD Blue SN550 continues targeting the middle of the pack and mostly succeeding.

With the larger AS SSD test set, read performance is functionally identical to the smaller set. For writes, the WD Blue SN550 1TB holds up better than some of the other consumer drives in our benchmark set but is still impacted by the larger test set. The 4K-64Thread write numbers drop by ~50% compared to the performance on the smaller test set, but other drives in our testing library suffer even more severe drops. As a result, the WD Blue performs well overall here.

PCMark, SPECworkstation, and our conclusion are up next.