This week at Computex 2019, several vendors are launching PCIe Gen4 SSDs in an attempt to pair with the PCIe Gen4 in the AMD X570 Ryzen platform that we covered in our AMD Computex 2019 Keynote Coverage. The Toshiba Memory XG6-P is a PCIe Gen3 device which is still what the entire Intel market will be using, as well as much of the AMD EPYC, mobile, and embedded markets will for most of this year.

Power is rated at less than 5W and the drive is a single-sided design with components all on the top side. That makes the Toshiba Memory XG6-P easy to cool. Many 2TB M.2 2280 (80mm) designs use both top and bottom components which are harder to cool.

While writing this story, our Editor-in-Chief Patrick saw one of these at Computex 2019 in Taipei, Taiwan so here is the live product:

He confirmed the back of the PCB was not populated in the Toshiba Memory XG6-P.

With SATA SSDs on their way out, NVMe SSDs offer more performance at similar costs and smaller footprints. Most desktops and servers support M.2 2280 NVMe SSDs making the Toshiba Memory XG6-P an interesting performance option for the segment. In STH’s lab, we are no longer buying SATA SSDs and are only buying M.2 and U.2 SSDs at this point. This is when the market changes to NVMe and Toshiba Memory is taking advantage of that trend. 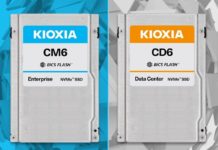 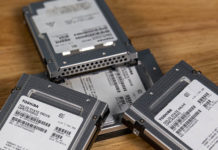