The Supermicro SYS-5018A-LTN4 is not the world’s most powerful machine. If you are looking for an ultra low power x86 networking appliance for an application like pfSense, this should be very high on your list of servers. With peak loads of under 20w and four Intel network interfaces plus out of band management, it certainly does make a lot of sense for a wide number of networking applications where low power is a necessity. What is more, the system has probably the best kept secret in terms of onboard CPUs, the Intel Atom C2358. That SoC provides not just quad gigabit Ethernet but also provides access to an integrated Intel QuickAssist accelerator.  It is the lowest power QuickAssist platform on the market today and the entire SYS-5018A-LTN4 system costs a fraction of what Intel’s add-on PCIe accelerators cost.

For our testing we utilized a Supermicro SuperServer 5018A-LTN4 platform with the following configuration:

We think this is a fairly typical type of configuration similar to the pfSense appliances we have used. We might suggest using a SATA DOM however we wanted to keep the configurations more consistent with other Rangeley systems we have tested. We did also get the opportunity to test the system with a 2.5″ 1TB SATA hard drive which was extremely interesting as a storage appliance. This platform will go by the name SYS-5018A-LTN4 or shorhand you may see it referred to as the Supermicro 5018A-LTN4 (SYS is for system.)

Looking at the Supermicro SYS-5018A-LTN4 one will find a compact 1U design. Given the units short depth, it can be fitted to 1U 2-post short depth racks often found in telecom closets. The case is the Supermicro SC504-203B which is popular for 1U builds. That model means that the I/O ports are on the rear of the unit whereas the SC505-203B has front mounted I/O ports.

In terms of CPU power, the onboard Intel Atom C2358 is a dual core Intel “Rangeley” series part. It absolutely sips power with a 7W TDP. Running at 1.7GHz with 1MB last level cache this is not the fastest CPU for compute intensive tasks. On the other hand, it is one of the best kept secrets that Intel probably does not want  you to know about. By using the Intel Atom C2358 you do get access to a hardware Intel QuickAssist 1.5 accelerator which has become significantly more useful over the years. One can now build IPsec VPNs, OpenSSL termination gateways, HTTPS nginx servers with OpenSSL offload all utilizing QuickAssist. What that practically means is that for certain networking applications, the offload functions of the QuickAssist accelerator will make the C2358 perform significantly better than a normal dual core CPU will perform. We are in the middle of writing some QuickAssist pieces however we can give this guidance: use CentOS if you want to try QuickAssist. It has been, by far, the easiest platform to get the QAT engine working with.

There are two fans in the chassis. One on the 200W 80Plus Gold power supply and one on to cool the CPU. We did test the system in a fan failure mode (e.g. we unplugged the fan) and the 7W TDP SoC was able to stay cooled without this extra fan for several days in our lab. In terms of field suitability, depending on the environmental conditions where this server is installed, a failed fan may still yield ample time to dispatch a replacement.

Inside the chassis the Supermicro A1SRi-2358F motherboard takes up a large portion of the internal space. The system has significant flexibility in terms of PCIe expansion and/ or drive expansion. For example, one can have configurations such as two 3.5″ hard drives, two 2.5″ SSDs or four 2.5″ hard drives/ SSDs. Even in the small chassis you can use all four SATA ports (2x SATA II and 2x SATA III) Furthermore, there is a PCIe 2.0 x8 slot with a 1U riser so one can add an additional quad 1GbE network card, a wireless NIC, PCIe storage or another device. Even in a small package there is a lot of flexibility.

For network connectivity, Supermicro has enabled the SoC’s Intel i354 quad gigabit NICs. This is a higher-end networking platform than many of the older Intel chips (e.g. Intel 82754L) and comes standard with the SoC. The Intel i354 is a roughly embedded equivalent of an Intel i350-t4

network card that generally retails for $75-150. For low-end networking applications this provides both the flexibility to have multiple I/O ports as well is the performance to handle gigabit speeds.

Unlike many low-end networking appliances, the Supermicro SYS-5018A-LTN4 has IPMI out-of-band management. This means that should the system run into any issues, the server can be maintained remotely with features such as serial-over-LAN, IPMI 2.0 commands and an iKVM with virtual media feature set. That makes administration significantly easier especially for appliances installed at remote locations.

For local administration there is a serial console port, a legacy VGA port two USB 2.0 ports and two USB 3.0 ports on the rear panel. One can optionally install USB boot devices either on the rear I/O panel or an internal USB 3.0 Type-A header for greater safety.

Overall, the thermal performance of the setup is excellent. The warmest part of the motherboard we saw was the Aspeed BMC which can be passively cooled. The power deliver components on our unit did get hot but were within spec and we did not notice any stability issues with the platform.

These are excellent results and this is certainly a testament to the platform. The low power operation is going to allow a wide range of deployment scenarios.

In terms of noise this is a rackmount chassis and is not silent, we saw a fairly consistent 38dba reading on our Extech sound meter. The PWM fans did not need to speed up during load however we suspect the power supply fan was the biggest noise maker.

We really like this platform and will be featuring it a bit more in our QuickAssist technology pieces coming on STH. If you need a low power appliance to provide basic firewall and an IPsec point to point VPN functionality, this is a killer platform. It gets even better when you can use the onboard QAT accelerator. The the ability to stay passively cooled in a pinch is a great capability. At around $400 the Supermicro SYS-5018A-LTN4 can be configured for firewall use for under $550 which is excellent. We can see these being great appliance for SMB installations where one needs to link a branch office with a central data center. 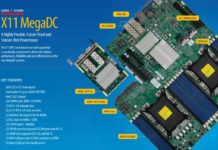