The Supermicro SuperServer SYS-1018D-FRN8T comes in a small 1U, short depth package, and otherwise unassuming. When you see the machine racked, the front mounted I/O with 6x 1GbE ports and 2x 10GbE SFP+ ports look intriguing, however it looks as though it is a standard network appliance. Lurking below the sheet metal is an absolute powerhouse of a system. Onboard is a 16 core, 32 thread Intel Xeon D-1587 SoC which is the top of the line “retail” Xeon D. The system also has a SAS2 controller that supports 16 ports in addition to 4x SATA ports and two ports for SSDs. In total, 22 drives can be used without accessing the PCIe x8 slot. We have been utilizing this machine for many months, and under a variety of circumstances and it is a very capable machine.

Our Supermicro SuperServer SYS-1018D-FRN8T was configured as follows:

This system has been an absolute workhorse since it has been in our labs. We have modified the configuration heavily and it worked with every application we threw at it.

The Supermicro SuperServer 1018D-FRN8T is a 1U server with front I/O. That means that both the rear I/O ports as well as the I/O expansion ports are found along the front side of the rack. In many cases this is a desirable configuration as it can make cabling very simple.

The rear of the unit has a redundant 400W power supply. Rated at 80 Plus Platinum the power supplies are efficient as well. The remainder of the rear is simply a bezel for fans.

The onboard I/O is plentiful. There are two USB 3.0 ports along with a VGA port for KVM carts. Above the USB ports there is a RJ-45 Ethernet port for out-0f-band management that can be directly connected to a dedicated management network.

Furthermore there are six 1GbE ports connected to two Intel i210-at controllers and an Intel i350-am4 controller. The two SFP+ ports are controlled by the Xeon D’s Intel X552 NIC. For firewalls and other appliances, this is a very strong configuration.

Inside the system we see a redundant set of fans near the PSU bezel and a very small motherboard inside. One can see our two stacks of Seagate Enterprise Capacity V3 1TB 7200rpm drives as well. We removed the PCIe riser and the airflow shroud from this picture to show off the internals better:

Inside is the Supermicro X10SDV-7TP8F motherboard. As one can quickly see, it is extremely compact in a FlexATX form factor. It does however have every option Supermicro offers on their FlexATX Xeon D line. This motherboard is currently the Bugatti Veyron of the Intel Xeon D motherboard world. It is not inexpensive, due to Intel’s Xeon D-1587 pricing, but this exposes every feature one could want in the platform.

Our test server had both the mSATA and m.2 slots equipped with SSDs. The mSATA slot had a simple 64GB SSD which is absolutely perfect for OSes, especially in embedded applications. The m.2 slot was occupied by the Samsung SM951 SSD which made an excellent ZFS and Ceph caching SSD. Supermicro also has configuration options using traditional SATA DOMs as well.

Although not part of this review, we did utilize the PCIe slot both with 40GbE networking cards as well as Intel P3600 NVMe SSDs and the setup performed well. Since 10GbE and SAS are built-in, there is significant flexibility in terms of what PCIe card can be installed.

Our one point of feedback to the Supermicro team is that this server could be equipped with a cable that connects the four SFF-8643 SAS ports onboard to the bottom rear expansion slot. That would allow this system to have sixteen external ports, perfect for serving as a disk controller. We were told that this is an option and Supermicro does have the part required, we just did not have it in our review unit.

We wanted to give an idea regarding overall performance of the Supermicro SuperServer 1018D-FRN8T. Since our configuration was focused on high-compute, we focused our benchmarks on compute workloads. We used this system in our Supermicro X10SDV-7TP8F review and for our Intel Xeon D -1587 benchmarks. We are providing benchmarks here as easy to reference information.

This is one of the most requested benchmarks for STH over the past few years. We (finally) have a Linux kernel compile benchmark script that is consistent. Expect to see this functionality migrate into Linux-Bench soon (we are just awaiting the parser work on it.) The task was simple, we have a standard configuration file, the Linux 4.4.2 kernel from kernel.org, and make with every thread in the system. We are expressing results in terms of complies per hour to make the results easier to read.

In terms of performing software compile workloads, the Supermicro SuperServer 1018D-FRN8T and its onboard Xeon D-1587 was fast enough to easily outpace dual processor systems with V1 and earlier CPUs. It also is significantly faster than some of the Amazon AWS instances we have tested.

OpenSSL is widely used to secure communications between servers. This is an important protocol in many software stacks so OpenSSL has performance implications for wide varieties of software from web transaction processing to VPN connections. We are using OpenSSL version 1.0.1g for these tests using Ubuntu 14.04.4 LTS.

With OpenSSL 1.0.1g we can see the Intel Xeon D-1587 onboard perform well. This class of server is likely to run web application stacks wher OpenSSL is very popular.

NAMD is a molecular modeling benchmark developed by the Theoretical and Computational Biophysics Group in the Beckman Institute for Advanced Science and Technology at the University of Illinois at Urbana-Champaign. More information on the benchmark can be found here.

For scientific workloads it is likely users will opt for larger core count processors with more memory capacity and bandwidth. We did want to provide a point of reference for the Supermicro SuperServer 1018D-FRN8T.

In terms of networking performance all four of the networking connections performed as expected using iperf3:

We ran these tests simultaneously and the six 1GbE NICs along with the two 10GbE SFP+ NICs were able to sustain the bandwidth figures we would expect.

We used our calibrated Schneider Electric APC PDUs to measure power consumption of the server. In the STH data center lab we utilize a 208V circuit which is common in North American data centers.

These figure is impressive given the server has an add-on 16-port SAS controller, four 7200rpm hard drives spinning and both m.2 and mSATA SSDs powered on.

Overall the Supermicro SYS-1018D-FRN8T is an amazing machine. It provides very low power consumption and has ample storage connectivity. We have used this server to test multiple operating systems and the new release of Ubuntu 16.04 LTS now includes the Intel X552 driver for the 10GbE ports making it even more versatile. We do think that adding internal to external SAS cables/ bracket to storage server configurations would be a great way to turn this into a storage head unit. We also think that the Intel Xeon D-1587 onboard should be paired with 128GB DDR4 RAM. 32 threads can easily saturate the dual channel memory controller and 128GB provides 8GB/ core or 4GB/ thread which is a lower bound of our recommendation in 2016.

You can learn more about the server here.

Try the Supermicro SYS-1018-FTN8T for yourself

The Supermicro SYS-1018-FTN8T configuration listed above will be available for testing immediately after this review on DemoEval. Click the logo to try this machine or others like it: 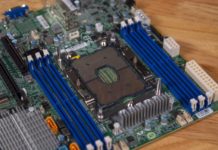