Perhaps one of the most under-the-radar launches this week will be of the Supermicro MegaDC line. Make no mistake, this is a huge deal. Supermicro is adopting some of the more open compute style infrastructure and bringing it to the 19″ rack form factor. If you liked some of the OCP directions, but cannot move to OCP racks, then Supermicro may have the answer. MegaDC incorporates features such as OpenBMC and OCP 3.0 .

The Supermicro MegaDC line is being launched with five new models:

The first model is the company’s MegaDC 1U compute. This is a 1U 10x 2.5″ SAS/ SATA SSD system that is designed around the X11 MegaDC EATX motherboard. As a standard form-factor, this means that Supermicro can only fit 8 DIMMs per Intel Xeon CPU (2-1-1) because of size constraints. The big news with the X11 MegaDC that underpins these new systems is a common set of new features. Instead of Supermicro management, these use OpenBMC. The base motherboard has dual 25GbE onboard as base-networking but one can also use an OCP 3.0 style Supermicro AIOM to add additional networking. There are two M.2 NVMe/ SATA ports along with various NVMe and PCIe I/O risers. This is a big step for Supermciro adopting OCP components.

Supermicro also has a 12-bay storage server with four 7mm NVMe SSD bays in front. This is a slide-out unit it calls the Supermicro MegaDC 1U Storage solution.

Supermicro also has three 2U systems built around a common motherboard. For GPU compute, the company has the Supermicro MegaDC GPU system that supports two double-width GPUs or five single-width GPUs such as the NVIDIA Tesla T4.

Supermicro is also moving to a new tray design for these servers as you can see in the photos.

If you want to use features such as OCP 3.0 style NICs that are designed to move to PCIe Gen4 with newer platforms, as well as OpenBMC for management, but do not want to rip and replace existing racks and infrastructure, these MegaDC machines are a good option. Supermicro has made its reputation by being somewhat of the standardized platform compute before OCP burst into the infrastructure market. It is great to see Supermicro providing an integration point between some of the OCP-specific innovations and Supermicro’s specialty in creating standardized platforms for 19″ racks. 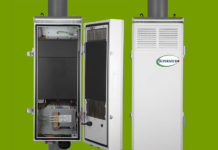