At Supercomputing 2018, we saw a really interesting phase change immersion cooling machine from Sugon. Liquid cooling was a key theme of the show with next-generation CPUs, GPUs, and other accelerators marching to higher TDPs. We saw a variety of big tank immersion cooling. There were cold plate water cooling solutions galore as we showed with Cray Shasta Cooling by CoolIT. Sugon is taking a different approach with their Nebula solution.

Here is a view of the full system from the front. What you can see is the immersion cooling main pumping and heat exchange system in the middle (labeled Sugon) and a compute rack to the right. Each compute rack is made up of front serviceable blades.

The blade trays themselves were extremely interesting. One can see a design with four CPUs and four CPUs per sled. The GPUs are SXM2 NVIDIA Tesla cards. The CPUs appeared to be socket SP3 mounting patterns and AMD EPYC. We asked someone in the booth and received a yes nod when we asked if they were Hygon Dhyana. [Editor’s note: Sugon contacted us after this article was published and said they can support Intel Xeon and AMD as well.]

Here is a view of one of these units operating on the show floor. Fluid is circulated into each sled to remove heat from components.

Moving to the rear, we can see the pipes and tubes that deliver the coolant behind the chassis. This coolant also keeps the network switches cool. In these pictures, you can see the backplane which supports power the node but also the communication fabric. Even the fabric chassis are being liquid cooled.

Making this entire system work is the Sugon Nebula unit that takes care of heat exchange, pumping, and circulation. Here is a shot from behind the center unit.

This was an extremely interesting demo. Some of our US and European readers may not know Sugon. They are a large Chinese OEM vendor. You can see from our Top500 November 2018 New Systems Analysis that Sugon is a major HPC player capable of designing and delivering Top500 systems. Indeed, it has 57 of 500 systems on the November 2018 list. As companies look to higher TDP parts in the future, liquid and immersion cooling will be important to maintain system density. 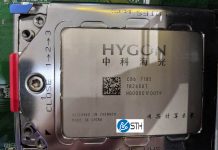 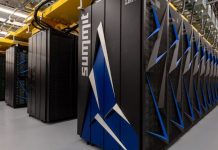 Top500 November 2018 Our New Systems Analysis and What Must Stop