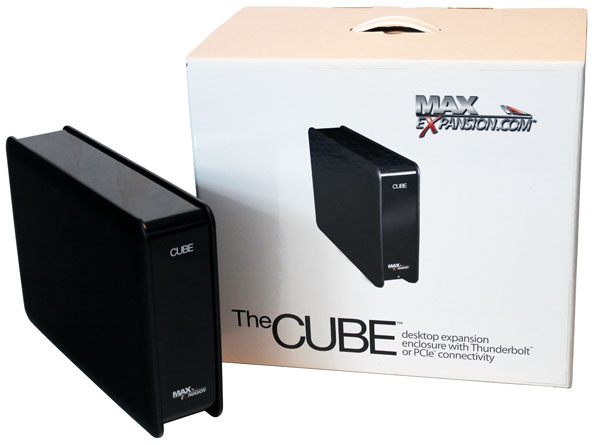 At Nvidia GTC 2015 we stopped by One Stop Systems booth and had a chance to look at their GPU expansion boxes. On display they had one of their huge 16x GPU boxes which stole the show. They also carry and wide range of expansion boxes from Flash Storage Arrays, Compute Accelerators, Servers, Desktop Expansion Appliances, PCIe Expansion kits and Disk Arrays.

Today we will take a look at their Desktop Expansion Appliances, which include boxes ranging from a single GPU all the way to the CUBE 3 line which can house up to eight GPU’s in one box.

Desktop Expansion Appliances or CUBEs come in three different sizes and include up to eight superclocked GPUs, a cable adapter and cable. The sample we received can house two single width GPU’s or one double width GPU. GPU’s that can be used cover all types that you can run on your workstation which include typical graphics cards like 980gtx’s, Quadro’s, Tesla’s, AMD GPU’s  and Xeon Phi’s. This gives you a great deal of flexibility in deciding how you want to use your CUBE with your existing workstation. The connection interface that the CUBE uses is two Thunderbolt cards.

Packaging for our CUBE came with foam padding inside to protect the contents and a number of accessory boxes that included cables, PCIe expansion cards and a power brick. Here we get a closer look at what our CUBE looks like. The CUBE itself is very simple, light weight and made of plastic. Here we see the back of the CUBE which has a power connector at the bottom, two blank PCIe covers and it has a Thunderbolt card installed. At the top of the CUBE is a single retaining screw which is removed and we then slide out the PCIe tray. Here you can see the Thunderbolt card and two empty PCIe slots. The entire PCIe tray slides completely out of the housing. The main cooling fan is located at the front of the tray and an additional fan covers the interface chipset. At the back of the PCB there is an 8-pin power connector that is used to power up the installed GPU’s. For testing we used one of our Nvidia Telsa K40 cards which was simple to install and connecting the included power cable was also simple to do. Then the entire assembly slides right back into the CUBE housing. This entire process was simple and only took us a few minutes to do. The last thing to do is cable up the CUBE to our host workstation. The kit comes with an additional Thunderbolt card which would be installed into a PCIe slot in your workstation, then attach the supplied cable. Again this is a rather simple process and only takes a few minutes to complete. After we had the CUBE and K40 installed and connected to our workstation we ran a simple test to see how this would perform.

Our test setup was very simple and not installed in a case.

There are no special drivers needed to get the CUBE up and running, everything is plug and play. We only needed to download the drivers for the Nvidia Tesla K40 which you can find on Nvidia’s website. Once the K40’s drivers were installed the K40 appears to the system just like it would if it was installed directly in the systems motherboard.

The test results show performance is almost exactly the same with the only difference being in the Memory Read and Write test results. This is because the CUBE is using the Thunderbolt interface and not direct PCIe bandwidth.

The cooling fans inside the CUBE kept the K40 inside the CUBE cool and we had no overheating issues when we ran AIDA64 stress test on the K40. It also ran with little to no noise for those that want a nice and quiet workstation. We would also like to add that our sample came with a Thunderbolt card that can be used to connect to an Apple workstation.

Our impression of One Stop Systems PCIe Expansion kit called the CUBE was very positive. Our CUBE was simple to setup and install in our workstation and it made little to no extra noise.

We would like to see a power switch at the front of the CUBE, right now the only way to turn it off is to unplug the power connector at the back. Metal construction for the case would also be nice but that would add extra costs. Sliding the tray in and out of the case can be a bit of trouble if it binds up, just take your time and work it out smoothly if it does this. You want to pull the tray straight out and not grab it by the top of the back PCIe frame.