We wanted to show the two Intel Xeon E3-1500 V6 launch members for comparison’s sake. Here are the summaries of the two CPUs. Both of which are 4 core / 8 thread models with 8MB L3 cache and 45W TDPs:

The key here is that these chips support vPro as well as ECC memory (unbuffered). The Intel CM238 chipset is perhaps the most interesting. Here is a block diagram for the Intel Xeon E3-1500 V6 platform: 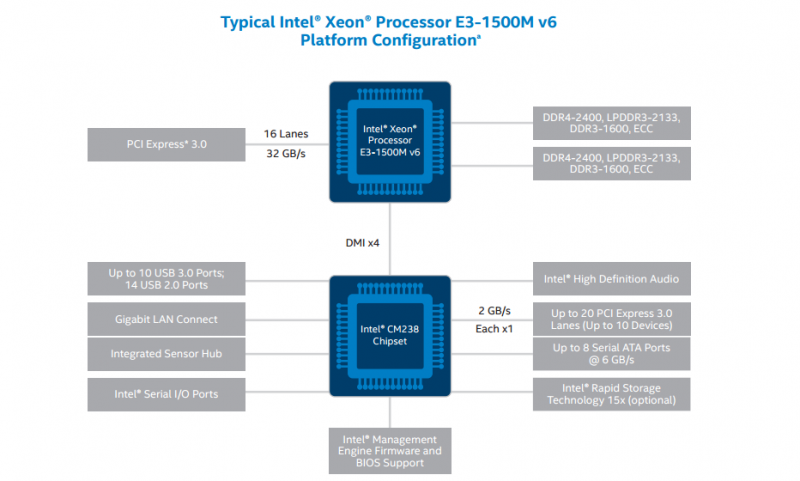 As you can see there are still 16 lanes of PCIe 3.0 for GPUs and other low latency devices. The Intel CM238 chipset now has up to 20 PCIe 3.0 lanes. That is a massive improvement in I/O albeit using the PCH/ DMI x4 link to the CPU. While it is a lower performance PCIe configuration than the Intel Xeon E5 V3/ V4 processors, it does allow many more PCIe 3.0 devices to be connected. That is important as Intel released more NVMe SSDs as well as Optane PCIe devices as well.

Coincidentally, Intel also launched 16GB and 32GB Optane PCIe accelerator cards so that one can cache slower disk or SATA SSDs on faster storage. This is far from what we would have wanted to see as these Optane parts are going to be limited to M.2 PCIe bus constraints. Optane availability is still a few months away with undisclosed benchmarks, undisclosed pricing and Q2 2017availability. That makes sense given the fact that we have seen hyperscale and large customers hungry for the technology. We discussed this in our Storage Trends for 2017 piece.

We do have embedded versions of the E3-1500 V5 CPUs in the lab (with the Iris Pro graphics) and will have benchmarks of those soon. Unfortunately, those boards take longer than the laptop parts and they also come later in the cycle due to the up-rated GPU. We expect to see the Intel Xeon E3-1200 V6 line along with the Iris Pro variants in the coming months.