We were on hand at Computex 2017 today for the Intel Core X series CPU and X299 platform launches. Along with these, we also saw the launch of a new Core i9 series CPU family. While the single socket core counts are a great improvement along with the clock speeds, Intel released its next-generation platform differentiation which is going to prove to be maddening for many users. We discussed this in our what to expect from Intel 2017 piece, but with the nine new SKUs there are at least four combinations of PCIe and memory configurations.

Before we get too deep into this, here are the nine SKUs that Intel is formally launching. Note that Intel did not provide full details for its top SKUs. With AMD’s competing Threadripper platform expected to launch the following day, this is likely a competitive move.

The summary on how to read the chart is that the high-end CPUs are in some ways upgrades of the Intel Xeon E5 V4 series. The heat spreader even looks similar: 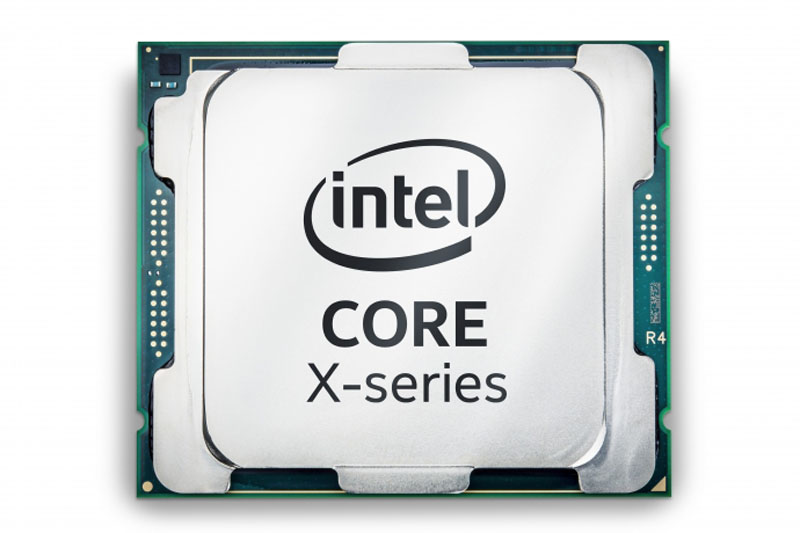 The mid-range to low-end of the series is clearly a competitive response to AMD Ryzen. The Intel Core i7-7820X is an AMD Ryzen 7 1800X killer given the fact that the Intel platform has more PCIe lanes and more memory bandwidth/ capacity all in the sub $600 market. We are likely to see many of the Ryzen 7 SKUs drop in price once these hit the market.

Here are the key details of new family that will range from 4 to 18 cores. One item to note is that all features are not available on all models (e.g. Turbo Boost Max Technology 3.0):

With this new family, Intel is launching the Core i9 brand, the first major extension to the Core series in many years. The flagship is a complete monster (at $2000):

The company did confirm that these new chips are 14nm tri-gate chips as expected:

On the cache side, Skylake-X pushes more cache to the cores over being shared L3 cache.

This is an architectural shift that we expect to see in other Skylake derivatives such as Skylake-SP. In terms of CPU architecture, this makes sense as Intel needs large caches to fill growing pipelines. The L3 cache does take up a lot of die space so Intel needs to continually evolve how that die space is allocated.

Intel also has a new technology called “Turbo Boost Max Technology 3.0” which helps get the highest boost clocks for its CPUs:

Of note, this is a feature only available on the Intel Core i7-7820X and up in the new SKU stack. Four of the nine models launched do not have this feature.

Why this is Maddening Product Differentiation

If someone walked up to you on the street tomorrow and asked, “what machine learning CPU should I get?” What should your response be? For a single GPU system maybe the Core i7-7800X or Core i7-7820X are enough. For a multi-GPU system, you are likely better off getting two Intel Xeon E5 V3 CPUs (say E5-2630) than even a Core i9-7900X just to get more PCIe 3.0 x16 lanes. This is because Intel has decided to cull PCIe lanes of the Core i7 series. Even the outgoing higher-end Broadwell-E chips with 40 PCIe 3.0 lanes would be a better option than a Core X generation Core i7.

Furthermore, one is required to use the LGA2066 platform even with the Core i5 SKUs that can only use dual channel memory and have 16x PCIe lanes.

Instead of just stating four memory channels and 44 PCIe lanes, Intel now has four different PCIe/ RAM combinations with nine new SKUs. That is maddening. The Intel tax for requiring 32x PCIe 3.0 lanes for dual GPUs is approaching $950. You can get an Intel Xeon E5-2620 V4 and get 40 PCIe lanes for much less.

We know the reason for this. Intel is actively trying to discourage inexpensive “light the platform” CPU purchases. For example, on paper one may think that the Intel Xeon E5-2603 and E5-2609 series (V1-V4) CPUs would rarely sell. In practice, they are popular in systems where you just need the least expensive CPU you can find to utilize the platform. Every GPU sale feeds one of Intel’s largest competitors, so Intel is finding a way to take back some of those marginal dollars. More concerning is that if you mirror PCIe 3.0 x4 NVMe drives or Optane drives, you are going to quickly start running out of PCIe lanes with the new platforms.