At SC16 we had the opportunity to casually poke around the HPE booth and saw a HPE Moonshot module we have not had the chance to use yet: the HPE ProLiant m710x. We have heard a lot of interest in the Intel Xeon E3-1500 V5 series CPUs from the VDI community ever since they were launched earlier this year. Intel and Citrix are bringing GPU hardware accelerated VDI to the market at a lower price point than NVIDIA GRID. Intel does not charge a software license fee to use GPU acceleration like NVIDIA does.

The Intel Xeon E3-1500 V5 generation combines a low-end Xeon CPU along with integrated Iris Pro graphics. The HPE Moonshot cartridge in question, the ProLiant m710x, uses an Intel Xeon E3-1585L V5 processor. It is a quad core CPU with clock speeds in excess of 3.0GHz. Onboard there is an Intel Iris Pro P580 GT4e graphics solution with 128MB of eDRAM L4 cache. What struck us was the expandability of these extremely small modules.

In terms of storage, there are a total of 4x m.2 slots that support NVMe SSDs. One can have many TB of NVMe SSD capacity in the small form factor. In addition to this is a SATA based m.2 slot for a boot SSD.

Furthermore, there are 4 SODIMMs onboard that can each handle 16GB SODIMMs for a total capacity of 64GB. As you can see from the rear of the unit, these are very expandable nodes.

Rounding out the unit, under the heatsinks, is a Mellanox ConenctX-3 Pro based dual 10GbE adapter.

Although having 180 cores in a 4.3U chassis is not spectacular, the ability to also fit 2.8TB of RAM and 180TB of flash, dual network switches, and 45 lightweight GPUs is certainly a very interesting density play. We expect the Intel Xeon E3-1500 V5 Skylake-H series CPUs to find their way into embedded motherboards shipping en masse over the next few weeks. These HPE ProLiant m710x cartridges can also be used in smaller chassis now that HPE supports other form factors. 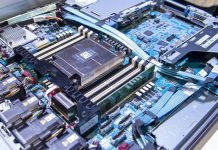 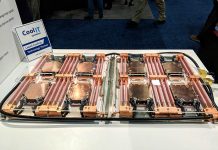