In our HP ProDesk 400 G4 Project TinyMiniMicro Guide we see what this system offers in the ~1L system category. This ended up being a nice node, but one of our bottom three in terms of value. In this guide, we are going to discuss the system itself and its features. We are also going to focus the lesson learned around avoiding the value trap we entered with this system.

As part of this project, we are releasing videos with some additional looks at the systems and some more candid thoughts. Here is the video for this:

This article will have a bit more since there are some facts and concepts easier to convey using text rather than video. You can also see the full video series using this YouTube playlist.

In Project TinyMiniMicro we are purchasing a large number of these devices from different sources. While a standard STH review is of a new product, these TMM nodes occasionally have specs that differ from what one would expect. In all of these pieces, we are going to talk about what makes the nodes unique. We are now well over 20 different nodes to increase diversity. We are testing these on a more circular economy/ extended lifecycle basis to see how they can be deployed after their initial use as corporate desktops. 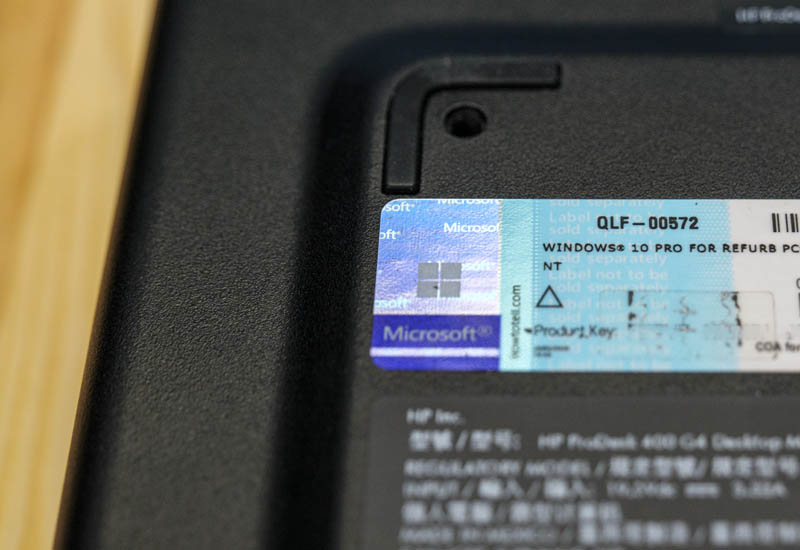 To round out the configuration, we would, at a minimum add a $25 extra 8GB SODIMM to hit 16GB. We would also grab a 256-512GB SSD for $50-60. The system with the hard drive was heavy and sluggish since we are accustomed to using SSDs these days.

We are going to go into the hardware overview, then into the key specs. We are then going to talk a bit about performance and power consumption before getting to our lessons learned from these units and our final words.

In the front of the chassis, we get headset and headphone jacks as well as two USB 3.0 ports. Some of the newer systems come with 10Gbps USB 3.2 Gen2 ports and/or Type-C ports but this system was still from Gen1 Type-A ports as an era. We have also seen some systems offer three USB front panel ports on other ~1L workstations, but here we have the more common design with two.

On the rear of the unit, one gets two DisplayPort headers as standard in the system, but ours had one of those blanked out. More on that in a bit. There is an optional slot that can be blank, VGA, DP, or HDMI. In our system, we have a HDMI port. We also have four USB Type-A ports. Unlike the ProDesk 600 G4 Mini, and many other units, only two of these are USB 3 while the other two are USB 2.

For networking, we can see the 1GbE port. Since this model does not support vPro, HP is using a lower cost NIC. Here we have a Realtek RTL8111 1GbE NIC. The protrusion on the left side is an antenna that HP’s design keeps very compact. Between that left side antenna and the visible DisplayPort, one can see a DisplayPort header that is blanked out. As we were opening the system, we quickly saw that there is a metal motherboard header in that location even without removing the heatsink.

As a result, we attempted to remove the blanking panel. It turns out that it was a robust port cover that was not designed to be easily removed, but it eventually came out.

These systems state two DisplayPorts in the specs so we tried the hidden port and found it worked in ours. This may not always be the case, but it was a good example of how looking at the system and specs can lead to finding features that may not be advertised in the listing.

Opening the system is done via a single screw. HP’s design retains the screw on the chassis.

Inside the system, we see the CPU and memory on top and the expansion slots below. Like other HP units, the dual SODIMM slots are found under the system fan. Our unit came with 8GB but we would augment this with a second 8GB DIMM for 16GB total.

There is a 2.5″ drive tray system that sits in the chassis and ours came with a 500GB hard drive. Unlike newer and higher-end EliteDesk models, this uses four screws with vibration dampeners and is not tool-less to install a drive. Removing the tray requires removing two screws. Tool-less servicing is something HP up-sells in higher-end machines as well. We can also see a cable system instead of a hard mounting point in the node.

There is also a M.2 2230 slot that is usually reserved for WiFi. On these, you will likely find a Qualcomm Atheros or an Intel 802.11ac WiFi + Bluetooth unit if they are installed. In our system, we had the Intel Dual Band Wireless-AC 9560NGW, Wi-Fi + Bluetooth combo adapter. Since the ProDesk 400 G4 Mini does not support vPro this is listed as a non-vPro module.

Many of the HP systems look similar. Here we can see the ProDesk 400 G4 and 405 G4 Mini units that have similar features except that the ProDesk 405 G4 is based on the AMD Ryzen platform. Both the higher-end ProDesk 600 G4 and EliteDesk 800 G4 have three front USB ports with the addition of a Type-C port to both. That is another way HP differentiates the products.

On the rear of the units, we can see that most have transitioned away from USB 2.0 and instead use USB 3.0. We wish HP would have just made the systems more useful by using USB 3.0 rear ports instead of the two USB 2.0 ports.

Next, we are going to look at the key specs we have been able to pull from a number of different sources to get you some idea of what to expect in terms of configuration diversity. We are then going to get to performance and power consumption.

Intel Arc A770 with a Special Twist at Innovation 2022