Today we are looking at a virtualization lab called “PigLover’s Playground” which has been detailed in the forums. It balances power consumption with the capacity to provide robust storage and networking. Interestingly enough, the setup doubles both as a virtualization lab, as well as a household media center. Recently we have looked at a dirt cheap data warehouse used for an Oracle startup. We have also looked at a 50TB plus VMware vSphere cluster recently from another forum member. Here is a quick look at PigLover’s Playground, this weeks featured home virtualization lab.

One other interesting point is that the lab uses a Avocent in-rack KVM purchased for under $100. Looks like a very nice unit!

Head over to the ServeTheHome forums to see the full writeup and detail on this virtualization lab. 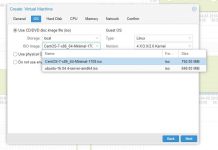 Directly Download an ISO to Proxmox VE for VM Creation