Cavium just announced that its newest 64-bit Arm CPU, the ThunderX2, has hit general availability. At STH, we do have benchmarks and a full review. We have not been given the OK to publish them yet but our piece is comprehensive at over 5000 words and dozens of tests and images. The company’s press release just hit the wire so we wanted to cover that and highlight a few points in the meantime.

The Cavium ThunderX2 family is really interesting. Instead of targeting lower performance workloads like other ARM offerings, the ThunderX2 is designed to be a high-performance chip. If you look at the partners in the official press release they are Atos, Cray, and HPE, or in summary, HPC shops. The new chips have 8 channel memory, up to 4 way SMT, and dual socket configurations. That means you can get up to 256 threads per server. Visually, here is the impact:

We go into the history of Cavium ThunderX2 in our full review, but we can say this, the new generation is on par with AMD EPYC 7000 series and Intel Xeon Scalable in terms of performance while topping out at a $1795 price tag.

Here are the key specs from the press release: 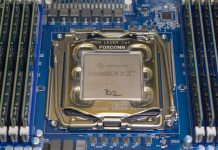