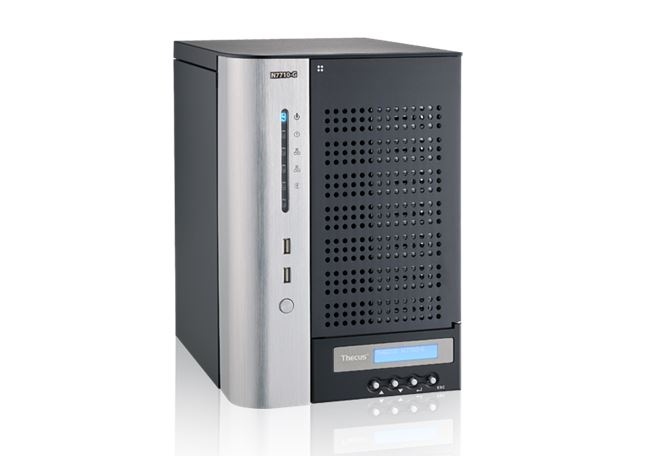 Recently we had the opportunity to test the Thecus N7710-G. This is a follow-up piece to our Thecus N7510 review and ThecusOS web management pieces. After some time we were able to put the Thecus N7710 through our benchmark suite. Like the N7510 the N7710-G is a 7-bay NAS unit. There are a few other similarities including dual gigabit Ethernet connections and HDMI out capabilities. The N7710-G is a much more robust unit. It features an Intel Pentium G850 processor, 4GB ECC DDR3 RAM and a 10 gigabit Ethernet connection. Whereas the N7510 was largely constrained by its limited network connectivity, the N7710-G has faster networking and a 2.9GHz dual core processor to power it.

The 320 x 210 x 270 (mm) chassis came double boxed with protective plastic and padded liners. The brushed metal face certainly differentiates its appearance from lower cost plastic enclosures. Likewise the prominent LCD placement is a great feature. I have found myself using the LCD panel quite a few times. One of them is just to find the DHCP address the unit gets on its first boot. In terms of materials brushed metal is only on the units face though. The door that covers the drive bays is black instead of a metallic finish. I like that all relevant indicators are on the front of the chassis so the other lines are clean. Thecus includes a total of 7 drive bays. This allows for up to 42TB of raw storage (7x 6TB drive) in the platform which is frankly more than many businesses and home users will use even assuming 1-2 drives worth of capacity will be lost to parity. Opening the metal door and one can see seven hot swap drive spots. There is a door in front of the drives. Each door has locking drive tray latches. This is important to avoid accidental or unauthorized intentional removal of drives. There are two USB 2.0 ports on the front of the chassis. USB is still a common way to load data onto NAS devices. On the Thecus N7510 the front panel USB ports were USB 3.0 which frankly is a bit better. Then again, the N7710-G does have 10GbE so it is targeted at network data access.

As we have seen with other 7-Bay units, Thecus does use a PCB backplane that has cutouts significant enough in size to allow for ample airflow. The Thecus unit does support SATA but not nearline SAS drives. The rear of the chassis has two large fans and two gigabit Ethernet ports which is standard for this class of device. Thecus’ major differentiation is onboard VGA output, HDMI output along with audio outputs. Beyond this, Thecus also adds 10 gigabit Ethernet using a RJ-45 port. The addition of 10GBase-T Ethernet gives significantly more bandwidth to the platform. The important part here is that one can use this in a home or office setting to drive media output using these ports. In a home segment, being able to play audio or video directly from the NAS unit is excellent.

Here the major feature is the 10 gigabit networking via a PCIe add-in card pre-installed. For the price, it is one of the least expensive NAS units with onboard 10 gigabit Ethernet. The chip itself appears to be Marvell based. All MAC addresses do start with 00:14:FD addresses which is Thecus. That makes it a bit easier to find on the network.  One can login via SSH and see the network settings:

We did a guide earlier on getting the unit up and running using the Thecus ThecusOS web management interface. The overall UI is responsive and for those that are used to enterprise web-based applications the interface will be intuitive. One very interesting thing that Thecus opens up to end users is the ability to SSH into the machine for a remote, text based interface. The underlying OS seems to be Red Hat based so it will be familiar to many folks. Here is a very interesting point. Using the terminal, we can see that the unit is using mdadm RAID. As one can see here, there is a 4- drive mdadm RAID 6 array on the unit. Practically speaking, this means that there is a lot of documentation around the underlying RAID solution. The key here is that the SSH shell is available, but one does not necessarily need to ever use it. Most work will be done directly in the web GUI.

Thecus has a few key differentiation points in terms of hardware specifications aside form the audio/ video outputs. First, Thecus has 4GB of ECC RAM where many competitive systems are still using 1GB of RAM.

Another extremely important specification is the fact that the N7710-G uses a RJ-45 based 10GBase-T connection. There are certainly trade-offs with this design. SFP+ has been the dominant 10 gigabit Ethernet interface for the past few years. 10GBase-T interfaces are becoming more common as latency and power consumption falls. The primary benefit here is that one can still utilize the network port over existing 1GbE infrastructure. That allows companies to migrate later to faster switches.

Thecus also utilizes dual Intel 82574L gigabit NICs. Many other solutions use the much less expensive Realtek solutions. The Intel 82574L is one of the most popular server NICs over the past six or so years. It is nice to see a NAS company take networking seriously.

An aside – in raw processor power the desktop N7710-G now has more CPU power and similar amounts of RAM to a legacy NetApp FAS2040. That machine of course had more I/O but the processor was used to address up to 136TB of disk space, and that is well before today’s 6TB drives.

We hooked the Thecus N7510 up to our main Quanta LB4M 48 port gigabit switch with dual SFP+ based 10 gigabit Ethernet connections. The switch is certainly more geared towards cloud data centers but it does have plenty of bandwidth.

Suffice to say there was plenty of bandwidth available.

Benchmarks are awesome, but for the Thecus N7710-G we decided to take two different routes to test. The first was standard file sharing with a single client and IOMeter. This is fairly standard testing. The second is with multiple clients, namely 9x dual CPU servers each with two gigabit connections to the Dell PowerConnect 8312 switch and the main server with dual 40GbE connections (Mellanox ConnectX-3 based). Suffice to say, we easily had enough bandwidth to saturate the dual 1GbE links and the 10GBase-T link. One network was the “storage” network and the other network was the main network that the rest of the lab was on. All of the nodes were setup in this fashion, much as one would do with OpenStack, OnApp, Eucalyptus or other cloud offerings. (Yes you would generally segment into additional networks but there is usually a private and public LAN/ VLAN setup involved.) These are really meant mainly for file storage so we tested IOMeter across the nodes. Single speeds were on the public side. Dual gigabit speeds were on the private side. Most reviews thus far of the Thecus N7510 only utilized one bonded network so we thought that it might be interesting to up the ante a bit since we had easily about 20x the traffic generation capacity on both sides.

One can see, fairly good performance from the Thecus unit. With 7x relatively slow 3TB drives this is a good result. The dual gigabit performance is about what we would expect but there is a huge delta when the 10GbE adapter is engaged.

The Thecus N7710-G is audible from a foot away. The below was taken in a 34dba ambient environment at 18 inches from the front of the unit using our NIST calibrated Extech sound meter.

There is certainly an audible fan noise that one needs to contend with. As one can see, this is not very loud, but it is present. In an office, if the unit is in a corner, background noise will likely cover it up easily. Still, it is something to be mindful of if one wants a completely noise free solution.

Overall the Thecus N7710-G was a great overall performer. Setup and administration using the web GUI Thecus provides is a big feature for the home and SMB segments where command line linux administration skills may be in shorter supply. iSCSI worked fine and connected directly to our ESXi and Hyper-V lab. Shares were immediately available to computers on the network. Performance wise, the faster processor and 10GBase-T Ethernet is an awesome combination.

In terms of price, the Thecus N7710-G retails for around $1100 on Amazon. In comparison the N7510 was $710 on Amazon. The Thecus price with 10GbE is less than competitors sell similar units for without 10GbE pre-installed.

Thecus NAS systems do require a bit more technical know-how to administer the advanced features. One does get SSH access which is nice for advanced users. The front panel LCD is great for key stats like finding the unit’s IP address. For semi-technical users, the Thecus N7710-G has high quality internal components, and better than previous-generation enterprise NAS performance all at a price lower than many current 6-bay competitors. The one item we would love to see is a SFP+ NIC which has more low-cost 10GbE switch options available.