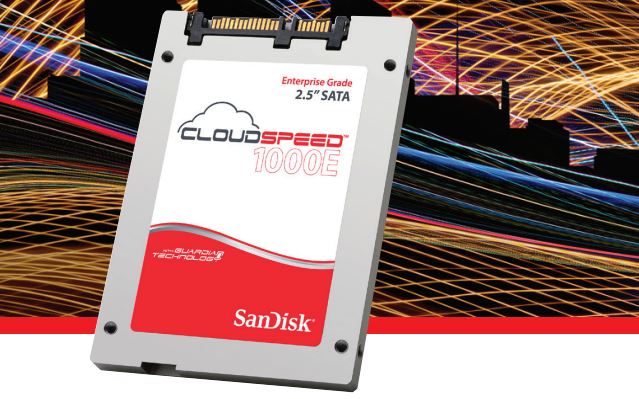 Today we have quick benchmarks of the SanDisk CloudSpeed 1000E 800GB SATA SSD. Recently we undertook an effort to benchmark several SAS SSDs. Here is a recent Toshiba 12gbps SAS review. We also received some requests to add common SATA SSDs. A big driver here has been that one now gets 10x SATA ports on an Intel Xeon E5 V3 platform as a standard feature so adding inexpensive, SATA storage is common. In cost sensitive markets such as commodity web hosting, SATA SSDs are commonplace.

The SanDisk CloudSpeed 1000E we are looking at today is based on a fairly standard Marvell controller design but SanDisk is touting the drive’s reliability and write endurance as a key differentiator. The CloudSpeed 1000E is spec’d for 3/7 DWPD for five years thanks to its SanDisk Guardian Technology. That is considerably higher than the Intel S3500 and similar read optimized SSDs. At 800GB this drive has capacity for many different types of applications that may need its endurance features. Here is the quick SanDisk video on endurance (warning marketing heavy):

With that we did put the drive through our quick benchmarks. These drives were not heavily benchmarked or sampled by SanDisk but we do know SanDisk specs the drives at 450MB/s read and 400MB/s writes.

We are using the same test configuration as we did with our SAS SSD tests. It should be noted that these drives will work on the onboard Intel controller but we wanted to present a different view of their performance by using the SAS controller. We did buy our own (actually three) drives for benchmarking so this is not a SanDisk sanctioned benchmark session.

For our quick tests during this part of the series we will just provide the quick benchmarks with only a bit of commentary. The results should be fairly straightforward and the index of previous articles in this series (linked above) is a good resource to compare against. Just for reference, we did do quick benchmarks on another SMART Storage acquisition based drive, the SanDisk Optimus 400GB SAS SSD recently.

Here we see sequential read/ write speeds in the same ballpark as marketing numbers would suggest. In fact, these drives are cooler and faster than the 400GB SanDisk lb406s SLC SAS SSDs we tested previously, especially in write speeds.

Here we can clearly see a 745GB formatted capacity of the drive. We can also see strong write performance. This is likely due to the onboard DRAM cache with power loss protection which serves as a write cache. Suffice to say the CloudSpeed drives are performing well.

ATTO is the king of sequential workloads as it generates best case scenario results. We see the CloudSpeed 1000E hits almost 470MB/s write and 480MB/s reads. While these are below many “fast” consumer SSDs, the CloudSpeed drive performs well.

These are, of course, just our quick benchmarks. We have our more exhaustive performance consistency benchmarks almost completed at this point. The key here is that the SanDisk CloudSpeed 1000E drives are made for low endurance and consistent performance rather than peak/ burst reads and writes. Our more exhaustive benchmark session will show how these drives perform significantly differently than other consumer offerings. More to come on these drives.