Today we have quick benchmarks of the Samsung SM843T 480GB SSD. The SM843T is in many ways similar to Samsung’s consumer drives, except that it has tantalum capacitors for power loss protection, server focused firmware and a higher 2 DWPD/ 5 years write endurance (there are a few spec sheets out there citing 1.8 DWPD). Samsung drives seem to perform a bit better on Intel SATA controllers versus the LSI/ Avago SAS controllers we use. Still, we would expect excellent read speeds from the SM843T even on LSI controllers. The major benefit of these drives are that they are priced relatively competitively in the market and work well enough that we have deployed several to the STH colocation.

We are using a SAS controller so one cannot compare results directly to consumer-driven setups where a SATA SSD is connected to an Intel PCH port. There is a latency penalty for going over the PCIe bus to a controller to SAS. It also is a reason NVMe is going to be a game changer in the enterprise storage space. We do perform our full day of heavy write workloads as pre-conditioning to these drives.

Our Samsung SM843T 480GB drive performed a bit lower than we would have expected on our write tests on the LSI/ Avago controllers. In terms of read speeds, we see top notch 4K and sequential read speeds.

CrystalDiskMark shows a few trends. There are very strong 4Kread/ write speeds where the SM843T 480GB is top of the charts. Likewise, in the larger read transfer sizes the Samsung offering is very strong. On the write side, the figures are generally good with the high queue depth 4K write test being the most problematic. This does not seem to happen on the Intel SATA controller and not when the drive is fresh. There are plenty of data points out there on these drives so this is just one more different angle.

On the ATTO read side, we see the Samsung SM843T perform extremely well. Starting around the 16k sizes the SM843T is topping charts.

On the write side, from around the 32k transfer size the Samsung drive easily outpaces the competition.

Overall the Samsung SM843T performs fairly well. Like all SSDs, we do see some access patterns that the drive is optimized for. With ~2 DWPD of write endurance, these are not heavy write optimized drives. These days, “write optimized” drives often start in the 10 DWPD/ 5 years and scale up significantly from there so it stands to reason the SM843T is tuned more for read performance. Samsung has released the SM853T which we are hoping to get soon for reviews. We did just want to provide the SM843T as another point in our data set. 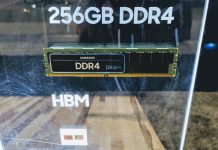