We finally have our review of the MikroTik CRS226-24G-2S+RM switch which is a 24-port 1GbE switch with two 10Gb SFP+ Ethernet ports and lots of functionality. This is a follow up to our popular MikroTik CRS226-24G-2S+IN review and is essentially the rackmount version of this switch. The MikroTik switch has been installed in one of our datacenter labs for a few months now, and we feel ready to publish the review. While it is not going to replace higher-end switches, at around $265 it is a relatively low cost solution that will work well for many people. We are going to evaluate this solely in a rackmount setting. If you are looking to purchase a switch that will sit on a desk, lab bench or a shelf, the IN model is the lower cost and more compact choice. That evaluation criteria also means that we are going to be a bit harder on the RM version as it has different environmental demands.

In a world where price is no object, there are certainly better switches out there in terms of performance. On the other hand, at around $265 new, they are extremely reasonable in price.

The reason it is a great value is because of three factors:

We are going to explore these in today’s review. Being fair, these are not the same as some of the higher-end rackmount switch units in terms of processing power. As an example, the Quanta T1048-LY4A we use in the lab has a much higher switching rate but costs 3-4 times as much albeit with 24 additional Gigabit ports. On the other hand, as we will soon see it is a significant step up in terms of functionality over something like a Netgear ProSAFE 24-port rack mount gigabit switch in the $165 retail range.

Although MikroTik is not as widely stocked as some other brands you can get the units from Amazon and on Ebay:

We are doing this review in the context of this unit being a $265 switch, new. There are certainly better switches out there that cost more, so we are doing the review in light of the fact this is meant to be a low cost option.

We primarily used five machines for today’s review. It should be noted that we have a bit of experience with these switches due to having three already deployed, each one with every port occupied. We ended up using a few of our Fremont lab servers to help test the CRS226.

Each VM had its own dedicated Intel gigabit NIC and Hyper-V based Linux VMs. We were just trying to generate traffic.

The two physical features one is paying the extra $100 for over the Netgear model listed above can be seen on the right side of the switch. There is a LCD status screen. While an LCD status screen may be a nice to have, this one has touch capabilities. Using the touch capabilities (and after entering a PIN) one can configure interface IP addresses and perform other basic admin tasks. The touchscreen is by no means excellent. Instead of a touchscreen akin to any touchscreen phone since the original Apple iPhone, this is more around the sensitivity of a touchscreen between the Apple Newton and a 2005 eara Windows Mobile 5.0 crop of devices. Being fair, it is a LCD screen on an Ethernet switch that is meant to be in a datacenter rack and used a handful of times at most. Some UI items were spaced a bit close together so one does need strategic finger presses to enter numbers on the small screen, especially if one has average to large size hands.

The second major feature is in the form of 10Gb Ethernet. The MirkoTik CRS226-24G-2S+RM has two SFP+ ports providing high speed uplinks. Good uses for this might be adding a shared storage server that may be serving the 24 gigabit Ethernet ports or as uplinks. Either way, the flexibility to add 10Gb SFP+ networking is excellent. Frankly, these two ports make the switch so much more versatile that one should just get this switch over non-10Gb competition for $100. We now have 6 of the CRS226 units deployed in labs and racks and those ports always fill up.

Moving to the rear of the unit, one can see a DC input and various vents. The unit generally stays cool even using only passive cooling. This is impressive for 10GbE switches as the 10Gbase-T Netgear units like the Netgear ProSAFE XS712T we recently reviewed are known for being noisy. There is an empty fan cutout and several other cutouts designed for different appliances.

In terms of power delivery, there is a grounding point as well as a DC input. Minimum power consumption is generally in the 6.1w-6.3w range and the maximum rated power is 21w. In the datacenter lab, ours is using anywhere from 15-18w on a regular basis. We have single solid state drives that use more power than this unit.

Inside the case we can see the same PCB as we saw in the dektop models. This is exactly what we expected. The LCD ribbon cable provides a link to the front LCD which is the only bit of functionality on the left side of the case. The case is wide enough that it fits well in most standard racks but is so wide that if one is trying to navigate it into place through existing wiring there is not much room to maneuver.  One omission here is that there is no internal power supply.

The impact is that these units are powered by small external power bricks and/or “wall warts” or via PoE in. The power brick may not seem like an issue, but it did not fit our $1200 – 24 outlet Schneider Electric APC AP8441 PDU. For about $20 we were able to get a replacement power brick but still had a power brick dangling from the rack. The MikroTik CCR-1036 above the unit had a built-in power supply. That would be a much cleaner solution.

We had a MikroTik CCR1036-8G-2S+EM switch also in the Sunnyvale datacenter lab. It would be nice to see the designs align a bit more in terms of SFP+ port placement, the console port type and other elements. That is a nice to have not a must have. The more important vectors the CRS226 solves are around price and using a similar OS.

This is a very simple physical switch design but one that is certainly a step up from the average inexpensive 24-port switch. MikroTik does offer extremely attractive pricing on their SFP+ modules and SFP+ 10 gigabit NICs can be purchased for $30-40 oftentimes (check the forums for latest deals.)

Another key feature of the MikroTik CRS226-24G-2S+RM is its RouterOS level 5 license. That is one shy of the highest level 6 license which has most features licensed at an unlimited level. The CRS226-24G-2S+RM has a 400MHz processor and will run out of processing power well before it runs out of most features it is licensed for. Here are the license levels from the MikroTik wiki.

What is the big deal about RouterOS and a level 5 license on a switch? RouterOS has a strong web GUI for example that has a plethora of configuration options. As one can see, the level of features available through the web interface is closer to that of pfSense rather than a basic HP Procurve, Dell PowerConnect and etc systems. For example, if one wants to run a DHCP server from the switch, that is easy to do.

Certainly there are features such as BGP and VPN present in the web interface, but the CRS226 does not have the memory nor the CPU power to fully take advantage of those features. It is absolutely shocking how much functionality MikroTik has in such a low cost switch.

We saw the same transfer performance we saw with the CRS226 desktop model. This makes sense given what we learned from the hardware.

One note in terms of performance is that the CRS226 does not support traditional link aggregation (IEEE802.3ad.) For newer OSes this is less of an issue. For example, those running Windows Server 2012 R2/ Hyper-V Server 2012 R2 one can use OS software features to minimize the impact.

The MikroTik CRS226-24G-2S+RM is a very interesting tool. For basic 1GbE switch capabilities along with the ability to provide NAS and uplink functions over the dual SFP+ interfaces, it is quite awesome. The wide range of features available in the RouterOS Level 5 license is a step above what other switches below $500 USD offer. We would like to see an internal PSU as having an external power brick in a rack can be a challenge to deal with. A solid combination of low power consumption, high port count, SFP+ networking, an extremely low price ($265) and a well featured operating system make it very hard to beat. MikroTik did not send us this unit to test. Instead we do use this and the desktop version in our datacenters and labs and they have worked extremely well for us. Saving power on the switch allows for a second switch or another low power server appliance to be added. Given the RouterOS and physical port versatility, the MikroTik CRS226-24G-2S+RM is a super switch. 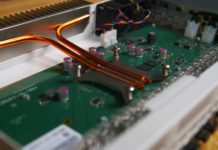 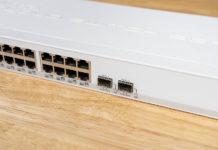 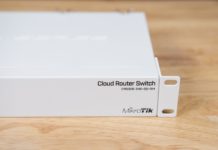