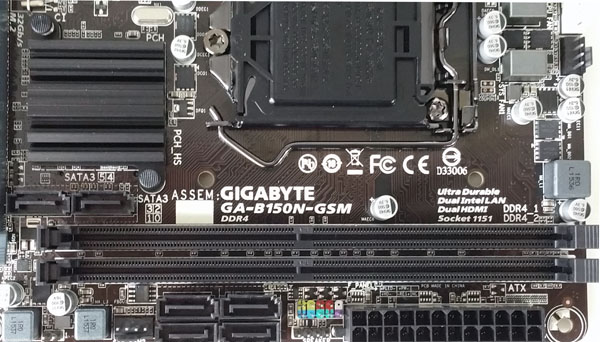 We have looked at a large number of workstation class motherboards over the years and we think we have found the smallest form factor motherboard that has all the features you need for a mini-workstation. Enter the Gigabyte GA-B150N-GSM Mini-ITX motherboard.

The GA-B150N-GSM includes support for GPU’s, M.2 SSD’s, onboard Audio and overclocking abilities that make this motherboard ideal for small workstations that can pack a heavy punch in processing power. The GSM designation means that this motherboard is intended for long-life in environments like corporate desktops.

The GA-B150N-GSM has a rather plain looking retail box compared to Gigabytes gaming motherboards, then again this is a more industrial type motherboard so no real need for fancy graphics on the box.

The GA-B150N-GSM is a flexible motherboard with memory as it supports ECC DDR4 UDIMMs (in non-ECC mode.)

The accessory kit is small and only includes the necessary items for installation. There is 1x M.2 Socket 1 connector for the wireless communication module which is optional. No M.2 wireless device is included in the kit.

Taking the motherboard out of its packaging we get first look at GA-B150N-GSM.

The GA-B150N-GSM is small and packs a lot of features in this tiny space. The 1x PCI Express x16 slot on the left side does support graphics cards and we used a Quadro K5200 in our tests with no issues. The Quadro is huge compared the GA-B150N-GSM and over hangs the front of the motherboard by a substantial amount.

There is support for m.2 storage devices and as you can see there is little room for this on the top of the motherboard for such a device.

Lets flip the board over to see where this is located at.

Now we can see the M.2 connector on the back of the motherboard (Socket 3, M key, type 2260/2280 SATA and PCIe x4/x2/x1 SSD support). As we see new platforms pack more features, space has become tight on the mITX form factor and we have seen more bottom mounted components.

Having the M.2 SSD on the back side of the motherboard might add extra heat to the motherboard itself so we suggest air flow from case fans be directed to flow under the board if you use an M.2 SSD.

Now we are looking at the front storage ports which are 6x SATA 6Gb/s connectors (SATA3 0~5). SATA Ports 4, 5 are located just behind the memory slots next to the chip set heat sink.

The M.2 Socket 1 connector for the wireless communication module which is optional is located at the back of the motherboard and includes mounting brackets.

Looking at the back of the GA-B150N-GSM we find:

Let’s move on to the BIOS and benchmarks now.

The Gigabytes UEFI BIOS is clean and easy to use.

The main M.I.T. menu serves as the home screen, from here you can enter advanced features such as overlocking. In most configurations, we expect users to aim for stability rather than overclocking, but the support is there. It is certainly an interesting way to give users a few percent speed bump two years down the line.

Xpress Install is certainly the fastest way to install all the drivers needed, or you can install each driver separately and only install what you need.

For testing we used:

We ran our tests with Default BIOS settings.

Memory Latency ranged at about 63.4ns. Performance wise the GA-B150N-GSM ran slightly slower than our other motherboards tested. The Gigabyte GA-B150N-GSM is more focused on providing a low power stable platform than the maximum memory performance.

The full test results for our Linux-Bench run can be found here. Gigabyte B150N-GSM Linux-Bench Results

For a mini-ITX motherboard we found that it has impressive numbers in this test. It’s not the fastest motherboard in our lineup but it fits into a case that is much smaller than any of the others would.

In our testing with SPEC CPU2006 we use the basic commands to run these tests.

Our CPU2006 test results show results that compare well to our other motherboards we have tested. The GA-B150N-GSM does not hold back in performance in this test.

For our power testing needs we use a Yokogawa WT310 power meter which can feed its data through a USB cable to another machine where we can capture the test results. We then use AIDA64 Stress test to load the system and measure max power loads.

We ran our power tests with default settings. Peak boot up power load falls in about 110watts at boot up, then settles down to about 45watts lower at idle. Overall the GA-B150N-GSM runs about 10watts lower in power draw than our past motherboard reviews show. Having a simple design pays dividends at idle.

For our tests we use AIDA64 Stress test which allows us to stress all aspects of the system. At default BIOS settings we run just above 132 watts for a max load.

The Gigabyte GA-B150N-GSM motherboard is an amazing board for its size. Many boards this size we have looked at before are not really classed as workstation boards so they do not have the needed features for this role.

Now we have a full featured motherboard that can run GPU’s or even a Tesla cards and use the onboard video for display. Performance wise it is slightly lower than the bigger boards but it does use less power and still shows nice benchmark numbers.

depending on where you purchase it, this is about 1/3 cheaper or more than its bigger brothers.

Depending on how you want to outfit this system it can be installed in a very small case and be virtually noise free and cool running. Adding in a full size GPU and tower heat sink will increase the size of the case but you get the added performance of these extra components.

We would like to see a M.2 bluetooth/ WiFi card added in but many might not need it and that would only add to the cost of the motherboard.