The FreeNAS team released FreeNAS 11.0. The new release is significant for a few reasons. The new release marks the first since the fiasco of what was the FreeNAS (10) Corral release and then un-release. FreeNAS is popular among STH readers as it offers a FreeBSD-based ZFS storage platform with a web GUI.

FreeNAS 11 brings many of the features we liked in FreeNAS Corral to the popular NAS OS. The first major change is that it is now based on FreeBSD 11 which means you get better hardware support and many kernel enhancements out of the box.

For virtual machines, bhyve has been brought back from FreeNAS Corral, or added from FreeNAS 9.10. Jails are present. The major new feature is the S3 compatible object storage. This can be handy for many users although we still recommend using S3 over FreeNAS if you are setting up public downloads.

FreeNAS is also debuting its third GUI option for this year. Users can still use the original 9.10-like UI. The Corral UI is out which we knew. The new GUI is a beta feature that you can select from the login screen. We suspect the team is going to use this UI going forward, but since it is a beta feature it can change. It is expected this will move out of beta with FreeNAS 11.1.

Our advice, if this is not a test system, hold off on this release. FreeNAS Corral was similarly brought to a stable branch then quickly pulled. We understand that decision, an iXsystems joined the discussion on the STH forums on why. Although we would not predict a repeat, we also are much more cautious using FreeNAS.

You can read about FreeNAS 11 release here. You can download the new version here. We like that FreeNAS is moving the versioning forward beyond 10/Corral with this release as it is much less confusing.

If you do want a standard Debian Linux-based solution that can run standard KVM virtual machines, LXC cointainers, Docker containers and manage ZFS, Ceph and other storage solutions, check out the STH guide Create the Ultimate Virtualization and Container Setup (KVM, LXC, Docker) with Management GUIs 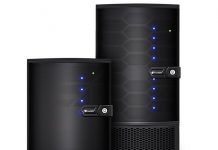