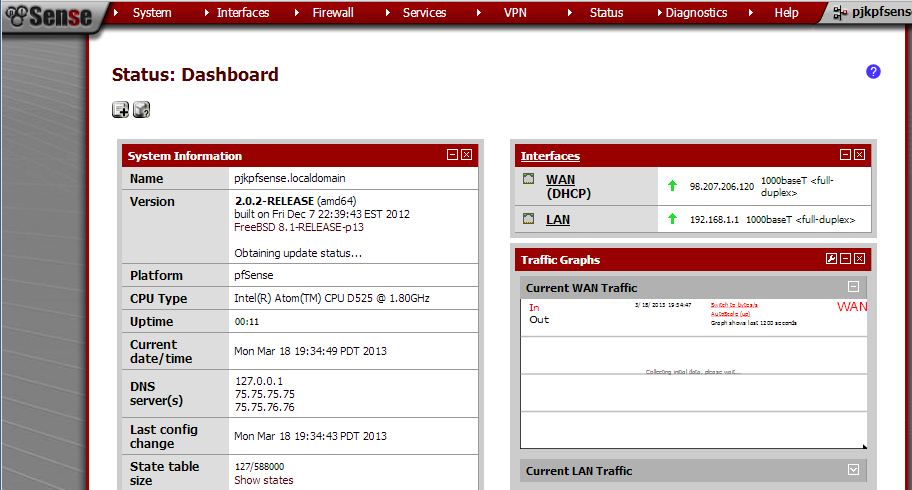 One feature that has made me try pfsense 2.2-ALPHA for the past few months is that it supports Microsoft’s integration components for Hyper-V in the base FreeBSD kernel. What that practically means is that pfsense 2.2 can be run in Hyper-V virtual machines, and platforms such as a Windows 8.1 Pro desktop or the base Hyper-V Server 2012 R2 (free) hypervisor.

The Intel Avoton and Rangely (Intel Atom C2000 series) processors have been extremely popular both on this site and with pfsense users. Many designs incorporate a low power SoC and four gigabit Ethernet ports. We have pfsense both at the colo and I have a pfsense machine at home. This pfsense machine has a Supermicro A1SAi-2550F with a quad core Intel Atom C2550 processor. RAM was just upgraded to 32GB in the box and this weekend saw another 480GB of SSD storage. The machine runs Hyper-V Server 2012 R2 as a base operating system.

Network services such as pfsense, a Ubuntu network functions server and a MAAS server are all housed on the C2550 server. One NIC is WAN, one is a dedicated Hyper-V management NIC and the other two are teamed to the home network (because Hyper-V is great with that.) The net impact is an awesome little server.

This week, Supermicro sent along a motherboard to test that is going to revolutionize pfsense. The 9.6″ x 8″ A1SRM-LN7F-2758. This beastly motherboard uses the quad Intel i354, a dual port Intel i350-AM2 and a single port Intel i210AT network controller. Most of the NICs can run in standalone or in bypass mode.

Overall, it is excellent for a network appliance and there will be more to come soon. Check out the forum thread as we already have benchmarks, lspci output and thermal images posted. The bottom line is that with bypass options and 7x network NICs, an 8 core processor, QuickAssist, and other features, this is going to be the low power network platform going forward. It is currently running Hyper-V and pfsense 2.2-BETA which is an awesome experience.