These hard drives are helium filled for smoother disk operation, include NASware 3.0 and are designed for NAS platforms with up to 8 drive bays. The new WD Red 10TB NAS drives run with seven platers at around 5400 RPM. Warranties support include three years for the Red NAS drives.

Here is a specs table for the five drives in the current generation family from 10TB to 3TB. 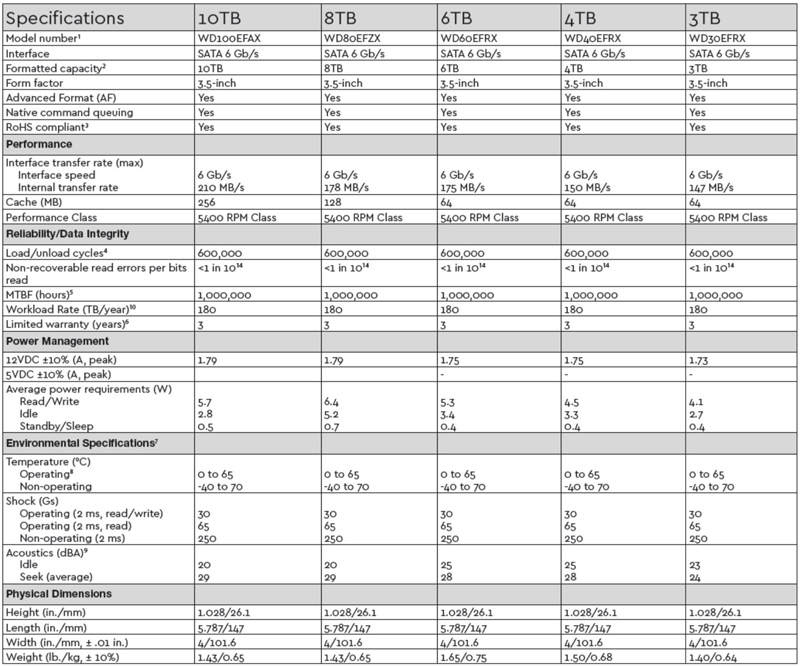 Let us take a look at these new hard drives from Western Digital. Our sample units from WD did not come with retail packaging. Many users will opt for bare drives to put into their NAS systems anyway.

A close look at the drive label shows information about the hard drive. We spot manufacture date, part numbers and these drives come with 256MB Cache.

Flipping the drive over and looking at the back side, we see the back is fairly clean looking with the PCB supported with blue foam to help dampen vibrations.

We finish off with a close up on the SATA and Power connections at the edge of the hard drive.

At the time of this review, we have a Synology DS916+ 4-Bay NAS and several smaller 2-Bay NAS units in our Lab. We wanted to use the most powerful NAS box we had in the Lab at the time so the NAS box itself would offer the highest performance with our drives. The DS916+ is a 4-Bay NAS, using two hard drives does limit us to what Raid types that we can use, we did include Synology SHR, JBOD, and Raid 0 data sets.

You can see in all Raid types tested the new WD Red 10TB NAS hard drives outperform the others tested. All though the difference is not large they still hold a performance edge.

Let us rerun the benchmarks with encrypted folders.

With encrypted tests complete, we find the WD Red 10TB NAS hard drives still hold the performance edge. In some benchmarks, the difference is greater.

CrystalDiskMark is designed to quickly test the performance of your hard drives and SSDs.

Looking for larger capacity hard drives to fill your NAS with, the new WD Red 10TB NAS drives offer serious capacity and performance to fill this role. The Red 10TB NAS drives are helium filled which help add capacity and coupled with Helioseal that gives smaller gaps between tracks and 3D Active Balance Plus to boost performance. NASware 3.0 comes included with this new series of drives which offers seamless integration with MyCloud Pro and MyCloud Expert range of NAS drives.

Although these are not necessarily performance oriented drives, even a RAID 1 set can more than saturate a 1GbE link in most scenarios. That has important implications as users chose their NAS systems. We suggest performance minded users opt for using these drives with dual 1GbE or 10GbE NAS systems to extract full performance.

Moving to 10TB drives does cost a fair amount more, but what you get with WD Red 10TB NAS HDD’s are drives with solid performance and massive capacity. You also can use fewer drives with the 10TB capacity which means lower power consumption and fewer drives in your NAS.