Today we have a quick how-to guide on Proxmox VE’s new feature: pve-zsync.  The pve-zsync features allows one to take automated backups of ZFS / virtual machine volumes and copy those backups to another node (more info here.) After having to recover from a major crash years ago, we now make more backups and also do VM level backups of our web hosting nodes. The reason for this is simple, recovering and moving applications when you have snapshots of virtual machines is a trivial task. Since we do use Proxmox in our infrastructure, we have been doing a few articles on the nice free hyper-converged platform. This is a guide we would suggest for anyone using two or more Proxmox hosts and ZFS on Linux for storage. Proxmox integrates ZFS on Linux fairly well so it is available to users on the newest versions out of the box and pve-zsync will allow you to replicate data across two hosts.

The first step is to create a target/ destination for the ZFS send operations to land. If you have this setup already then great. If not, then you will need to do a bit of prep work on your destination server. We are going to use “zfs create -s -V 400g” to create a sparse (thin provisioned) 400GB volume for a backup target.

One can see the “fmt-01-nvme1/thinbackup2” entry in our zfs list as having only 64K used. We use sparse/ thin provisioning because we are not exactly sure how big our volume will need to be.

The next thing we need to do is login to our source server and create a pve-zsync job. We use the following command to install pve-zsync on the server:

We use the command:

One can see the command run and the initial snapshot taking place.

We have a 10Gb dedicated storage network that s also being used for Ceph and other traffic on both nodes. Still with NVMe storage we see 300MB/s speeds. If you were using 1GbE and had a larger dataset, this initial sync can take a long time. If you did not have a dedicated storage network, this would also put a lot of stress on your NICs handling VM traffic.

When we use ZFS list on the target machine after compeltion, we can see fmt-01-nvme1/thinbackup2 has increased by approximately 40.5GB in size due to the sync occuring.

If you want to change settings, you can edit /etc/cron.d/pve-zsync and edit the cron job that is taking snapshots.

One can see the pve-zsync list and pve-zsync status has both of these working. It also shows the last time that the last sync took place.

Overall, this is a simple guide. There are a few features we would like to see added:

It is a great feature and if you have spare capacity in your Proxmox network, or a backup service like rsync.net with ZFS and root access in a jail, this works very well. 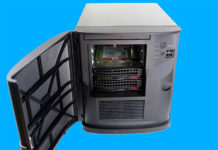 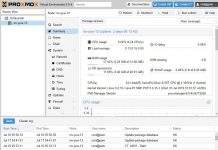