Although we often focus on higher-end NAS units at STH, the lower-end is seeing some dramatic shifts. At Computex 2018 we saw two NAS units from Asustor that used lower cost ARM processors but also included 10Gbase-T networking. The Asustor AS4002T and AS4004T are lower-cost NAS units intended as inexpensive network storage for small offices, retail shops, and homes. The NAS units have 10Gbase-T built-in as a major upgrade over previous generations.

The Asustor AS4002T is the 2-bay NAS model. The second “4” means that the Asustor AS4004T is a 4-bay model. Both utilize Asustor’s tool-less design which makes them easy to service in the field. They also feature dual 1GbE and single 10GbE (10Gbase-T.) The company had a RAID 5 hard drive array on the Asustor AS4004T running at over 600MB/s.

The NAS units use the dual 1.6GHz core Marvell ARMADA-7020 SoC with 2GB of RAM. This is not the highest-end CPU, but it is enough for this class of NAS. Power consumption is rated at sub 7W for the 2-bay NAS and under 20W in operation largely due to the ARM SoC. These units utilize the company’s GUI based management portal which is designed for novice users. We looked at a previous version of the Asustor GUI and a 2-bay NAS in our Asustor AS1002T 2-Bay NAS Review.

A bigger implication is that, although lower-cost, the Asustor AS4002T and AS4004T are leadership NAS units. Many of Asustor’s competitors are still launching 1GbE only NAS systems in these price bands. At STH, we firmly believe that 2017 was the tipping point for 10GbE and we want to see more NAS units adopt 10GbE and multi-gigabit networking. These days, there are low-cost (sub $250) 10GbE enabled switches and there has been an explosion of devices. As a result, NAS units even in smaller office and home environments are being pushed harder by multiple clients where 10GbE networking can help. 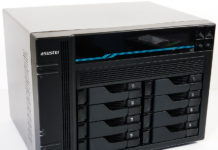 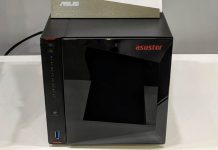