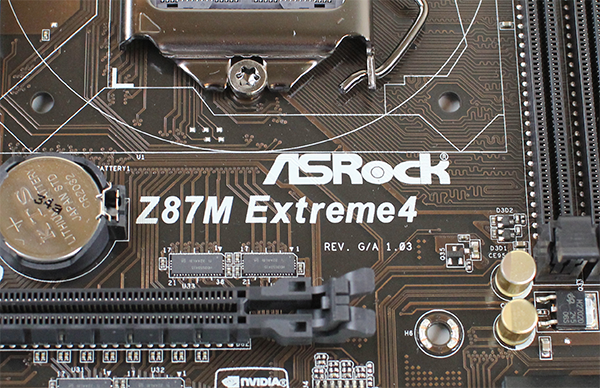 The ASRock Z87M Extreme4 is a mATX motherboard that packs most of the features any desktop user will need into a small package. With today’s modern Intel Z87 based motherboards, virtually every feature a user will need is embedded on the motherboard. Although this motherboard is certainly one of the less expensive on the market, the ASRock Z87M Extreme4 has many of the features one would expect from motherboards costing 50% more only two generations ago. For example, ASRock adds a premium sound option alongside an Intel gigabit NIC onboard and the ability to run multiple GPUs in AMD Crossfire or NVIDIA SLI configurations.

To test the ASRock Z87M Extreme4 we built a fairly high-end desktop. We did test the motherboard with both NVIDIA and ATI graphics cards, but since the Z87 chipset includes onboard graphics, we focused on using that.

The Z87M Extreme4 is a nice looking motherboard. Black and brown with gold accents works. The mATX form factor of the motherboard is a strong choice for a LGA1150 setup. If one takes into account that this motherboard can be purchased for well under $150, it certainly has a lot to offer in terms of a compact platform with most onboard features one would want. One will notice there are large heatsinks on the 8 Power Phase Design. Power features also include gold capacitors and the ASRock Digi Power solution. The motherboard is perfectly capable of overclocking K series processors. While it is not the best overclocker in the lab, using this plus a Cooler Master Hyper 212 EVO makes for an inexpensive way to get the vast majority of performance from a Core i7-4770K. The next step up in terms of cooling and power delivery will cost roughly double.

The four DIMM slots run up to 8GB unbuffered non-ECC DDR3 at speeds up to 2800MHz. Although clock speeds for CPUs are not up significantly this generation, the Haswell memory controller has proven itself to be stable at much higher speeds.

Looking at the PCIe configuration, we see a lot going on. There are two PCIe 3.0 x16 slots, a PCIe 2.0 x16 slot (x4 electrical) and a PCIe 2.0 x1 slot. Official specs list “2 x PCIe 3.0 x16, 1 x PCIe1 2.0 x16, 1 x PCIe 2.0 x1” which is hard to decipher. Hopefully that clears up some confusion for those researching their workstation builds. Most users will install one GPU, maybe two so the mATX form factor does work well. What would have been really interesting is if ASRock added a mini PCIe slot much like we saw on the Supermicro X10SLQ which would make the top x1 slot usable even with a dual slot GPU cooler being used. Still, for most users, the PCIe configuration along with the onboard devices will be more than adequate.

The rear panel I/O packs a lot of functionality. There are a few legacy connectors including a VGA out connector, PS/2 keyboard/ mouse connector and four USB 2.0 ports. In addition, video out can be served by both DVI and HDMI outputs. Four USB 3.0 ports can be found on the rear panel along with a eSATA port. In terms of external peripheral connectivity the only thing a user may find missing is a DisplayPort depending on the type of monitor they are using.

ASRock also utilizes an Intel i217V Gigabit network controller. When Sandy Bridge arrived two years ago it was common to see motherboards in this price range requiring one to add an Intel Gigabit CT network adapter to get Intel networking over the less expensive Realtek alternatives. That card adds an Intel 82574L controller, adds power consumption and takes up a PCIe slot so an onboard solution is considerably better. It is a great feature for ASRock to add at this price point.

Audio is something ASRock focuses on with the Z87M Extreme4. The implementation is a 7.1 solution and does include a S/PDIF optical solution.

ASRock calls this their Purity Sound solution which is supposed to offer a 115dB SNR. One can see the components for this next to the PCIe slots. The Purity Sound EMI shield covers the Realtek ALC1150.

For ASRock’s description of the Purity Sound:

Bottom line ASRock made an extra effort designing a sound solution that has additional shielding. For those looking for an incrementally better sound solution, I certainly heard clean sound with much less hiss than my main workstation’s onboard audio solution. Certainly something amazing since my main workstation uses a motherboard that costs more than twice as much as the ASRock Z87M Extreme4.

Overall, the ASRock Z87 Extreme4 is a strong motherboard. For the price range it competes in, it has all of the standard features one would expect. The UEFI BIOS are simple to navigate, nice-to-have software such as in-Windows 8 overclocking software is readily available. On-board features such as the Intel NIC and Pure Sound are great touches.  Our test motherboard was very easy to work with and in the price range is a strong competitor.